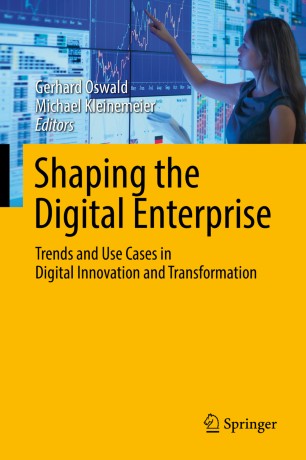 Trends and Use Cases in Digital Innovation and Transformation

Digitalization, defined as the process of moving to a digital business, is no longer a choice but an imperative for all businesses across all industries and regions. Taking a step toward becoming a digital enterprise is demanding and challenging. This book sheds light on cross-industry and industry-specific trends in digital innovation and transformation and on digitalization use cases.
The dimensions of customer centricity, leadership and strategy, business models, including offerings (products and services), processes, structure and governance, people and skills, culture, and technology foundation can serve as orientation for digitalization. The articles in this book touch on all dimensions of this digital innovation and transformation framework and offer possible answers to some of the pressing questions that arise when practitioners seek to digitalize their business.

Gerhard Oswald heads the Product Quality & Enablement Board area and is a member of the Executive Board of SAP SE. Oswald joined SAP in 1981. He was instrumental in developing the sales support network for the SAP R/2 software, responsible in particular for quality control. He then assumed responsibility for quality control in the development of the SAP R/3 software. From 1987 to 1993, Oswald was a member of the project management team responsible for conceiving, developing, and delivering SAP R/3. Following the completion of this project in 1993, Oswald was appointed to the SAP Extended Management Board. In 1994, he assumed responsibility for the SAP R/3 Services division, and was appointed as a member of the SAP Executive Board in 1996. SAP Active Global Support was founded under Oswald's leadership, heralding an era of continuous improvement of innovative support offerings which have demonstrated SAP's thought leadership in the industry. Oswald began his IT career at Siemens AG, where he was an applications consultant for SAP R/2 business processes from 1977 to1980. He holds a degree in business administration from the University of Applied Sciences, Mainz, Germany.

Michael Kleinemeier is a member of the SAP Executive Board of SAP SE. He leads the Digital Business Services organization. He was appointed to the Executive Board on November 1, 2015. Kleinemeier has held various leadership positions at SAP. In 2013, he was appointed President of the region Middle and Eastern Europe (MEE), where he was responsible for all market activities and the entire SAP product portfolio in this region. From 2010 to 2012, he was Head of Global End-to-End Services. In this capacity, Kleinemeier was responsible for driving sales and market adoption of SAP’s latest solutions. In parallel he served as Head of the DACH region (Germany, Austria, and Switzerland). In 2007, Kleinemeier was appointed Head of Industry Solutions and Corporate Officer of SAP. From 2001 to 2007, he was Managing Director of SAP Deutschland. During that time, he was also President of the former EMEA Central (DACH and the Benelux countries) sales region. From 1989 to 1999, he held key positions in sales, consulting, and training at SAP. From 1999 to 2001, Kleinemeier was Board member of itelligence AG, an SAP partner company. Kleinemeier holds a degree in commercial management from the University of Paderborn.

“Shaping the digital enterprise is an edited collection of 15 chapters compiled by a SAP business transformation services (BTS) team. … Most chapters have tables or diagrams that highlight important concepts. … ‘Key learnings’ and references are at the end of each chapter. … The editors and authors are accomplished international researchers, consultants, and practitioners. … read this book and help shape the digital future to create positive business and social change.” (Ernest Hughes, Computing Reviews, February, 2017)
Buy options