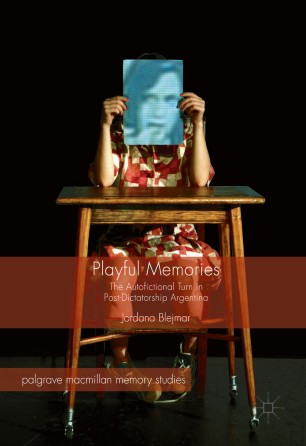 The Autofictional Turn in Post-Dictatorship Argentina

This volume examines the blending of fact and fiction in a series of cultural artefacts by post-dictatorship writers and artists in Argentina, many of them children of disappeared or persecuted parents. Jordana Blejmar argues that these works, which emerged after the turn of the millennium, pay testament to a new cultural formation of memory characterised by the use of autofi ction and playful aesthetics. She focuses on a range of practitioners, including Laura Alcoba, Lola Arias, Félix Bruzzone, Albertina Carri, María Giuffra, Victoria Grigera Dupuy, Mariana Eva Perez, Lucila Quieto, and Ernesto Semán, who look towards each other’s works across boundaries of genre and register as part of the way they address the legacies of the 1976–1983 dictatorship. Approaching these texts not as second-hand or adoptive memories but as memories in their own right, Blejmar invites us to recognise the subversive power of self-figuration, play and humour when dealing with trauma.

Jordana Blejmar is Research Associate in the School of the Arts, University of Liverpool, UK. Originally a literature graduate from the Universidad de Buenos Aires, Argentina, she studied for her PhD at the University of Cambridge, UK. She is a member of the steering committee of the Centre for the Study of Cultural Memory and has curated art exhibitions in Liverpool, Paris and Buenos Aires. Her research interests include photography and memory, the blurring of the boundaries between fact and fiction, toy and game art, and the material culture of childhood in Latin America, particularly in Argentina.

“Jordana Blejmar’s Playful Memories: The Autofictional Turn in Post-Dictatorship Argentina masterfully analyses a wide range of literary and artistic works by children of the disappeared and the post-dictatorship generation in Argentina more generally, showing how these writers and artists engage with the traumatic memory of the 1976-1983 military regime in a deliberately provocative, humorous, irreverent manner. A must-read for anyone interested in contemporary Argentinian memory culture, the book also has broader appeal. It magnificently exemplifies the recent trend towards pluralization and diversification in memory and trauma studies, and in so doing demonstrates these fields’ enduring relevance and continuing vitality in the globalized and digitized world of the twenty-first century.” (Stef Craps, Associate Professor of English Literature, Ghent University, Belgium, and author of “Postcolonial Witnessing: Trauma Out of Bounds”)

“Jordana Blejmar guides us with care and subtlety through recent “playful” interventions in Argentina’s memoryscape, showing how in their use of irreverence, humour and creativity, the contemporary voices of a younger generation of artists pose questions of profound importance for how we remember the violent past. Together they suggest there are many ways to talk about that history, beyond the horror and morality tales that too often come to operate as limitations. Blejmar invites us not only to salute the bravery of those who attest to the complex affectivity of being a “post-orphan” or “hiji”, but also to speculate about the possibilities each of the works proposes. Brimming with provocations for memory studies in general, this is an intelligent and hugely enjoyable book.” (Vikki Bell, Professor of Sociology, Goldsmiths, University of London, UK, and author of “The Art of Post-Dictatorship: Ethics and Aesthetics in Transitional Argentina”)

“Memory is nowadays ubiquitous in the world: memory studies, trauma theory, transgenerational and second-hand memories, new Holocaust studies… Jordana Blejmar’s voice, however, is not just one more in an increasingly crowded choir but that of a soloist or lead singer because she is a precursor and a trend-setter. She was among the first to study the artistic production (films, novels, plays, blogs, photos) by children of the disappeared in post-dictatorship Argentina. In this book she skillfully analyzes second-generation memories of trauma in that country and highlights their specificity and uniqueness while being part of a larger global scene: they are testimonial but not confessional, autofictional yet enmeshed in history and politics, playful but also mournful, humorous to the point of irreverence even if a byproduct of terror, highly personal but also part of collective memory.” (Fernando Reati, Professor of World Languages and Cultures, Georgia State University, United States, and author of “Nombrar lo innombrable: violencia política y novela argentina, 1975-1985”)