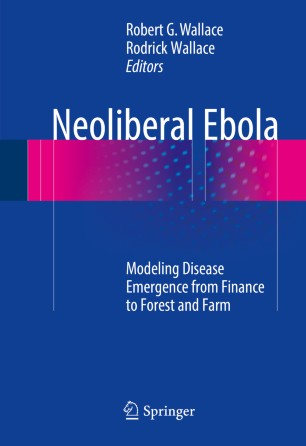 Modeling Disease Emergence from Finance to Forest and Farm

This book compiles five papers modeling the effects of neoliberal economics on the emergence of Ebola and its aftermath.

The multidisciplinary teams represented here place both Ebola Makona, the Zaire Ebola virus variant that has infected 28,000 in West Africa, and Ebola Reston, which is currently emerging in industrial hog farms in the Philippines and China, within a multi-plank modeling framework.This volume proposes an alternate science of disease and an adjunct program of interventions useful to researchers and public health officials alike.

Robert G. Wallace, PhD, is a public health phylogeographer presently visiting the University of Minnesota's Institute for Global Studies. His research has addressed the evolution and spread of influenza, the agroeconomics of Ebola, the social geography of HIV/AIDS in New York City, the emergence of Kaposi's sarcoma herpesvirus out of Ugandan prehistory, and the evolution of infection life history in response to antivirals. Wallace is co-author of Farming Human Pathogens: Ecological Resilience and Evolutionary Process (Springer). He has consulted for the Food and Agriculture Organization of the United Nations and the Centers for Disease Control and Prevention.

Rodrick Wallace, PhD, is a research scientist in the Division of Epidemiology of the New York State Psychiatric Institute at Columbia University. He received undergraduate and graduate degrees in mathematics and physics from Columbia, worked a decade as a public interest lobbyist, is a past recipient of an Investigator Award in Health Policy Research from the Robert Wood Johnson Foundation, and is the author of numerous books and papers on matters of public health and public order.