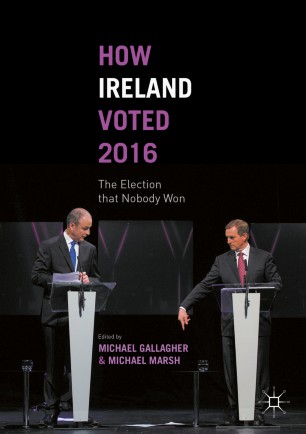 The Election that Nobody Won

This book is the definitive analysis of the 2016 Irish general election and is the eighth book in the well-established How Ireland Voted series. The 2011 election in Ireland was characterised as an earthquake, but the aftershocks visible in the 2016 election were equally dramatic. This election saw the rout of the government that had presided over a remarkable economic recovery, and marked a new low for the strength of the traditional party system, as smaller parties and independents attracted almost half of all votes. The first chapter sets the context, and later ones investigate the extent to which the outgoing government fulfilled its 2011 pledges, and how candidates were selected. The success or otherwise of campaign strategies is assessed, the results and the behaviour of voters are analysed, and the aftermath, when it took a record length of time to form a government, is explored. Other chapters examine the consequence of new gender quotas for candidate selection, consider the reasons for the unusual success of independents, and reflect on the implications. The book also reveals intriguing insights into the candidates’ experiences of the election, both successful and unsuccessful. It will be of use to students, teachers and scholars of Irish politics, as well as the wider reader interested in Irish politics and elections.

Michael Gallagher is Professor of Comparative Politics in the Department of Political Science in Trinity College Dublin, Ireland. He has published on parties, elections and electoral systems. Recent books as co-editor include Politics in the Republic of Ireland, (5th ed, 2010), Representative Government in Modern Europe (5th ed, 2011) and The Politics of Electoral Systems (2008). He has been a visiting professor at City University of Hong Kong, Université de Lille and New York University.

Michael Marsh is Emeritus Professor of Political Science in Trinity College University of Dublin, Ireland, and was formerly Professor of Comparative Political Behaviour, and served variously as Dean of Arts, Humanities and Social Sciences and Vice Provost/Chief Academic Officer of the University. He has published over 100 professional articles and book chapters on parties, elections and public opinion, and was principal investigator for the 2002, 2007 and 2011 Irish National Election Studies, co-author of The Irish Voter (2008) and co-editor of The Conservative Revolution (2016).