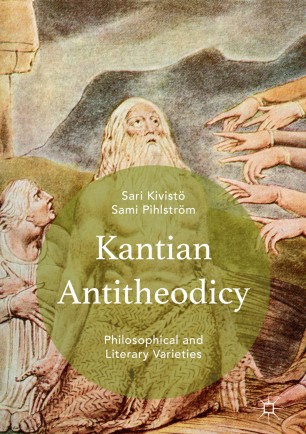 This book defends antitheodicism, arguing that theodicies, seeking to excuse God for evil and suffering in the world, fail to ethically acknowledge the victims of suffering. The authors argue for this view using literary and philosophical resources, commencing with Immanuel Kant’s 1791 “Theodicy Essay” and its reading of the Book of Job. Three important twentieth century antitheodicist positions are explored, including “Jewish” post-Holocaust ethical antitheodicism, Wittgensteinian antitheodicism exemplified by D.Z. Phillips and pragmatist antitheodicism defended by William James. The authors argue that these approaches to evil and suffering are fundamentally Kantian. Literary works such as Franz Kafka’sThe Trial, Samuel Beckett’s Waiting for Godot, and George Orwell’s Nineteen Eighty-Four, are examined in order to crucially advance the philosophical case for antitheodicism.

Sari Kivistö is Docent of Comparative Literature and (since 2015) Director of the Helsinki Collegium for Advanced Studies at the University of Helsinki, Finland. She is the author of The Vices of Learning (2014) and Medical Analogy in Latin Satire (2009).

Sami Pihlström is Professor of Philosophy of Religion at the Faculty of Theology, University of Helsinki, Finland (since 2014). He was previously Director of the Helsinki Collegium for Advanced Studies (2009-2015). He is also President of the Philosophical Society of Finland. His previous publications include Pragmatist Metaphysics (2009) and Taking Evil Seriously (2014).