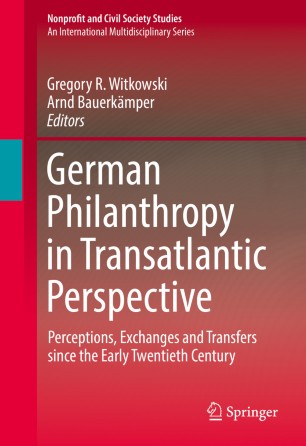 Perceptions, Exchanges and Transfers since the Early Twentieth Century

This volume examines philanthropic practices against the backdrop of the continuities, disruptions and changes in twentieth century German socio-political relations. It presents a differentiated understanding of the relationship between philanthropy and civil society that traces this connection from Germany’s first democracy, the Weimar Republic, through the Nazi dictatorship and Soviet-style rule in Communist East Germany to the stable democracy of the Federal Republic of Germany. While concentrating on Germany, this volume places German philanthropy in a triangular relationship with the United States and the developing world, primarily through Africa. In particular, the contributions to the book demonstrate that despite many transatlantic exchanges between German and American philanthropic organizations, these relationships should not be reduced to bilateral exchanges but rather seen in the context of a globalizing world.  More generally, this transnational study is a reminder that philanthropic activities need to be placed into their specific historical contexts. Such an analytical framework allows for more dynamic understanding of the meaning of philanthropy in society, illustrating both enduring and changing practices.