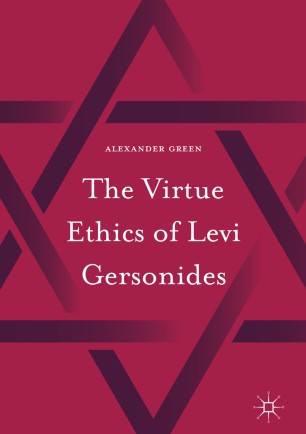 The Virtue Ethics of Levi Gersonides

This book argues that Levi Gersonides articulates a unique model of virtue ethics among medieval Jewish thinkers. Gersonides is recognized by scholars as one of the most innovative Jewish philosophers of the medieval period. His first model of virtue is a response to the seemingly capricious forces of luck through training in endeavor, diligence, and cunning aimed at physical self-preservation. His second model of virtue is altruistic in nature. It is based on the human imitation of God as creator of the laws of the universe for no self-interested benefit, leading humans to imitate God through the virtues of loving-kindness, grace, and beneficence. Both these models are amplified through the institutions of the kingship and the priesthood, which serve to actualize physical preservation and beneficence on a larger scale, amounting to recognition of the political necessity for a division of powers.

“In this pioneering study, Alex Green shows that Gersonides was not only a brilliant metaphysician and scientist but also an original ethical thinker who developed a new virtue ethics. Green explains that Gersonides considered ethics to differ radically from rule-governed science, since it treats of contingency, luck, liberty, and, above all, virtue.”(Warren Zev Harvey, The Hebrew University of Jerusalem, Israel)

“The ancient question of what constitutes a good life has become urgent for us. What are the virtues that best promote human flourishing? How should we think about human excellence? How can we square human choice, judgment, and action with the emerging scientific picture of our brains? Green does a real service by bringing the virtue ethics of a great medieval rationalist, Gersonides, into full view. We are in his debt for allowing Gersonides to join our contemporary conversation.” (Alan Mittleman, Jewish Theological Seminary, USA)

“In his The Virtue Ethics of Levi Gersonides, Alexander Green lucidly represents the thought of this generally little known 14th century Jewish philosopher. He also shows Gersonides' relevance for current philosophical interest in an ethics that is concerned with human character and not just with rules for human conduct. Green skillfully puts Gersonides into conversation with contemporary virtue theorists like Alasdair MacIntyre and Martha Nussbaum.” (David Novak, University of Toronto)

“This welcome study of virtue ethics in medieval Jewish thought focuses on Gersonides, a fourteenth century philosopher-scientist, in the light of three of his predecessors: Aristotle, Maimonides, and Nahmanides. Informed by contemporary philosophical debates, Green's careful work opens new vistas in the study of one of medieval Judaism's most protean figures.” (Menachem Kellner, Shalem College and University of Haifa, Israel)