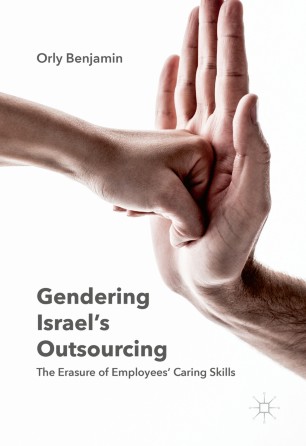 The Erasure of Employees' Caring Skills

This book presents an institutional ethnography of budgeting processes of commissioning contracts within welfare, education, and health ministries as case studies. With the historical surge in the power position of economic globalization organizations and their impact on public sectors’ withdrawal from the role of primary women’s employers, a gap between care worker employees and public sector administrators with respect to skill recognition has emerged in Israel. The book examines precisely how this gap is produced, enacted, and turned into a force that shapes the experiences of women in service and caring jobs. Increasingly more researchers are interested in the unexpected consequences of outsourcing; this account enters the Israel studies researchers’ debate over the extent to which the neo-liberalization of Israel had restructured its welfare orientation. Exposing the operation of service delivery in the gendering of women’s work may thus be intriguing for those participating in this debate. The analysis of the data presented here enables a portrayal of the negotiating and budgeting processes at work, which in turn sheds light on the salience of deskilling and de-professionalization to women’s disenfranchisement.

Orly Benjamin is Associate Professor and Chair of the Social Sciences Faculty Poverty Research Unit at Bar-Ilan University, Israel. She has published extensively on job insecurity and services outsourcing in Israel and co-edited a special issue on gender and government procurement. Her book Feminism, Family and Identity in Israel was published in 2011.

“Reading Benjamin’s book reminds us of the real need for better integration between social policy scholars and public policy and administration scholars, who are often telling the same stories in different languages. Feminists in general and researchers studying the role of women in the labour market in particular would benefit from chapters … in which the author proposes a political strategy she defines as a bridge between social forces that can promote services that are both feminist and democratic … .” (Nissim Cohen, Public Administration, 2017)
Buy options