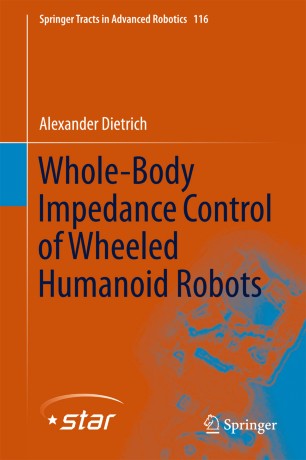 Introducing mobile humanoid robots into human environments requires the systems to physically interact and execute multiple concurrent tasks. The monograph at hand presents a whole-body torque controller for dexterous and safe robotic manipulation. This control approach enables a mobile humanoid robot to simultaneously meet several control objectives with different pre-defined levels of priority, while providing the skills for compliant physical contacts with humans and the environment.

After a general introduction into the topic of whole-body control, several essential reactive tasks are developed to extend the repertoire of robotic control objectives. Additionally, the classical Cartesian impedance is extended to the case of mobile robots. All of these tasks are then combined and integrated into an overall, priority-based control law. Besides the experimental validation of the approach, the formal proof of asymptotic stability for this hierarchical controller is presented. By interconnecting the whole-body controller with an artificial intelligence, the immense potential of the integrated approach for complex real-world applications is shown. Several typical household chores, such as autonomously wiping a window or sweeping the floor with a broom, are successfully performed on the mobile humanoid robot Rollin’ Justin of the German Aerospace Center (DLR).

The results suggest the presented controller for a large variety of fields of application such as service robotics, human-robot cooperation in industry, telepresence in medical applications, space robotics scenarios, and the operation of mobile robots in dangerous and hazardous environments.