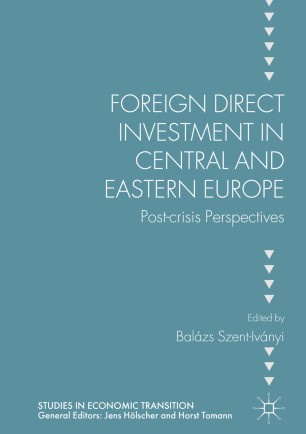 This book examines how foreign direct investment (FDI) inflows to Central and Eastern Europe have changed after the Great Recession. It argues that beyond their cyclical effects, the economic crisis and the changing competitiveness of Central and Eastern European countries have had structural impacts on FDI in the region. FDI has traditionally been viewed as the key driver of national development, but the apparent structural shift means that focusing on cheap labour as a competitive advantage is no longer a viable strategy for the countries in the region. The authors argue that these countries need to move beyond the narrative of upgrading (attracting FDI inflows with increasingly higher value added), and focus on ensuring greater value capture instead. A potential way for doing this is by developing the conditions in which innovative national companies can emerge, thrive and eventually develop into lead firms of global value chains. The book provides readers with a highly informative account of the reasons why this shift is necessary, as well as diverse perspectives and extensive discussions on the dynamics and structural impacts of FDI in post-crisis Central and Eastern Europe.

“This book sets out to describe and analyse the main developments in foreign direct investment (FDI), in terms of volume and structure … . For readers interested in CEE and the EU, this book can also provide valuable insights. The new trends it documents and analyses have not been reflected so far in appropriate policy responses. In this respect the volume provides policymakers with practical evidence and policy suggestions they would do well to consider and act upon.” (Liliana Pop, Europe-Asia Studies, Vol. 70 (7), 2018)
Buy options