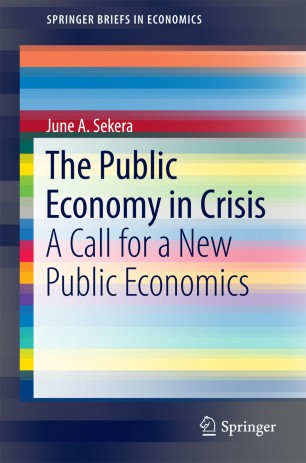 The Public Economy in Crisis

A Call for a New Public Economics

This Brief proposes a new theory of public economics which deemphasizes reliance on the free market and affirms the importance of public goods and services within the context of the democratic process and constitutional governance. Public non-market production makes up from a quarter to more than half of all economic activity in advanced democratic nation-states. Yet by imposing market precepts on the public domain, as mainstream economics, political science, and public administration do, public governing capacity is weakened and the democratic system suffers. Agencies originally created to meet public needs are being warped into entities whose purpose is to generate revenue and, in some cases, deliver private profits at public expense. Drawing on classic public finance literature, this book illustrates the differences between public economy and the market model and why those differences matter. Building on this, the Brief sketches the elements of a new theory of the public non-market and illuminates its connections to the delegation of power and collective provision of resources from the polity. This book will be useful to scholars of public economics, political science, and public administration as well as policy makers and those working in the public sector.