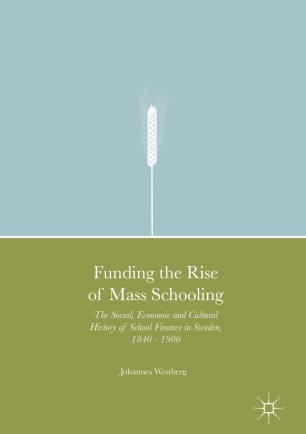 Funding the Rise of Mass Schooling

The Social, Economic and Cultural History of School Finance in Sweden, 1840 – 1900

‘…provides a fascinating window into the meaning and importance of schools as community institutions in a transforming economy… brings a new perspective to understanding the expansion of mass schooling internationally, and helps us appreciate the creativity and calculation of ordinary families… insightful, smart, and humane. ‘

‘… a remarkably interesting book about the social and cultural entanglements of school finance in 19th century Sweden. Westberg presents a compelling argument for the economic basis of the rise of primary schools, restoring the complexity of educational finance as a social and cultural dimension beyond reductionist approaches. His informed, inspirational and persuasive analysis documents the efforts related to the funding of mass schooling as it emerged; one wonders how we could make comprehensive arguments about the social dynamics of mass schooling in the 19th century before this book.’

This book explores how the remarkable rise of mass schooling was funded during the 19th century. Based on rich source materials from rural Swedish school districts, and drawing on evidence from schooling in France, Germany, England and the U.S., Westberg examines the moral considerations that guided economic practices and sheds new light on how the advent of schooling rested not only on monies, but also grains, firewood and cow fodder, showing how schooling was neither primarily guided by frugal impulses nor motivated by a fear of the growing working classes.

This book also broadens the theoretical horizon of history of education into social, agrarian and economic history in a wider context. Focussing on different systems of school finance, this work reveals a key change over time: from a largely in-kind system supporting schools in an early phase, followed by an increasingly monetarized, depersonalized and homogenized system of school finance. This will be a welcome contribution of interest to scholars in the fields of education history, sociology, and economics.

Johannes Westberg is Professor of Education at Örebro University, Sweden. Since defending his thesis in 2008, Westberg has published widely on the history of early years education and primary schooling.

“Not only does Westberg illuminate essential dimensions of the process of school funding, but this book is also extremely valuable for its timely reframing of historical research on education that should serve as a useful guide for subsequent scholarship. … By unearthing the important and neglected practices of school funding in rural Sweden, Westberg has opened up exciting new paths for further research on the rise of mass schooling.” (Cristina V. Groeger, History of Education Quarterly, Vol. 58 (2), May, 2018)
Buy options