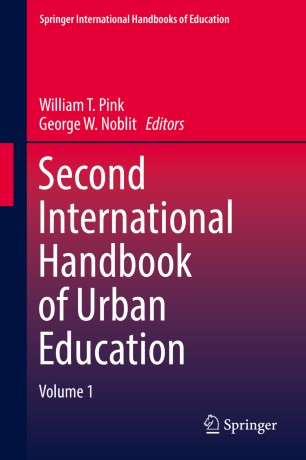 This second handbook offers all new content in which readers will find a thoughtful and measured interrogation of significant contemporary thinking and practice in urban education. Each chapter reflects contemporary cutting-edge issues in urban education as defined by their local context. One important theme that runs throughout this handbook is how urban is defined, and under what conditions the marginalized are served by the schools they attend.
Schooling continues to hold a special place both as a means to achieve social mobility and as a mechanism for supporting the economy of nations. This second handbook focuses on factors such as social stratification, segmentation, segregation, racialization, urbanization, class formation and maintenance, and patriarchy. The central concern is to explore how equity plays out for those traditionally marginalized in urban schools in different locations around the globe. Researchers will find an analysis framework that will make the current practice and outcomes of urban education, and their alternatives, more transparent, and in turn this will lead to solutions that can help improve the life-options for students historically underserved by urban schools.

William T. Pink is Professor Emeritus of Educational Policy and Leadership studies in the College of Education at Marquette University, where he has served as both department chair and as director of the doctoral program. He has published widely in the areas of delinquency, sociology of education, and educational reform. He has been the co-editor of The Urban Review (Springer) since 1978, co-editor of a book series entitled, Understanding Education, Social Justice, and Policy (Hampton Press), and co-editor of the book series entitled Education, Equity, Economy (Springer), both with George Noblit. He was recently appointed as Associate Editor of The Oxford Research Encyclopedia of Education (Oxford University Press). His most recent books are Cultural Matters: Lessons Learned from Field Studies of Several Leading School Reform Strategies (Hampton Press, 2005), the International Handbook of Urban Education (Springer, 2007), and Schools for Marginalized Youth: An International Perspective (Hampton Press, 2012).

George W. Noblit is Joseph R. Neikirk Distinguished Professor of Education at the University of North Carolina at Chapel Hill. His research has focused on urban education, race and equitable schooling, and qualitative research methods. He is an award winning scholar, most recently of the Mary Anne Raywid Award for Distinguished Scholarship from the Society of Professors of Education. His most recent books are School desegregation: Oral histories toward the understanding the effects of White domination (Sense Publishers, 2015) and (co-edited with William Pink) Education, equity and economy: Crafting a new intersection (Springer, 2016). He is the co-editor of The Urban Review. He was also co-editor of the International Handbook of Urban Education (Springer, 2007) which was the predecessor to this volume. Most recently, he is founding Editor-in-Chief of the Oxford Research Encyclopedia of Education, a global, online, continually revisable repository of education research.