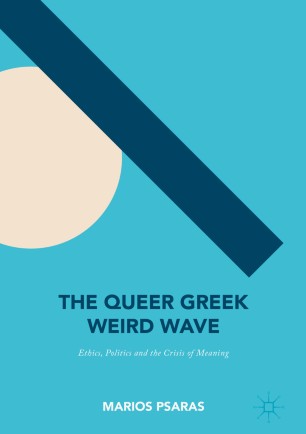 Ethics, Politics and the Crisis of Meaning

'Bold, original and theoretically informed, this is an insightful and provocative study of the ‘weird wave’ phenomenon in Greek cinema. Psaras explores the ways in which the films’ queer sensibility radically challenges the foundations of the national imaginary at times of deep socio-political transformation and crisis. The first book-length study on the topic, this is a very welcome addition to the growing literature on contemporary Greek cinema, and a must for those interested in philosophical queer film studies.'
- Dr Lydia Papadimitriou, Liverpool John Moores University, UK
Cinema might not be able to help heal a broken nation but it can definitely help revisit a nation’s past, reframe its present and re-imagine its future. This is the first book-length study on what has become an internationally acclaimed strand in contemporary Greek cinema. Psaras examines how the particular trend can be thought of as an integral aesthetic response to the infamous Greek crisis, illuminating its fundamental ideological aspects by means of a queer critique of national politics. Drawing on a wide range of methodological approaches from queer theory, film theory, ethical philosophy and psychoanalysis, this volume sheds light on the way the Greek Weird Wave challenges, deconstructs and re-imagines traditional notions of Greekness, the Greek nation and the Greek patriarchal family. This is achieved through close textual analysis of the subversive thematics and idiosyncratic forms of six films made by some of the best-known and most celebrated contemporary Greek directors including Dogtooth (2009) and Alps (2011) by Yorgos Lanthimos, Strella (2009) by Panos H. Koutras, and Attenberg (2010) by Athina-Rachel Tsangaris.