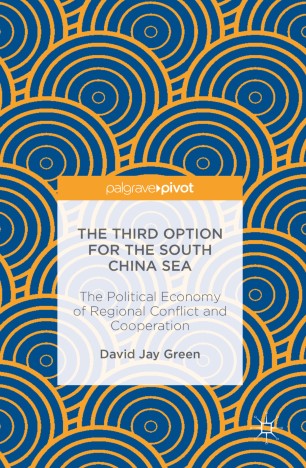 The Third Option for the South China Sea

The Political Economy of Regional Conflict and Cooperation

This Palgrave Pivot uses a simple model from game theory to explain the behavior of countries disputing ownership of resources and of small islands in the South China Sea. It argues that the rapid transformation of the region's economy - the rise of Factory Asia – is not being acknowledged, leading countries to take chances beyond what a rational picture of costs and benefits would suggest. Regional economic cooperation may be a viable alternative to the present conflicts. However, the varied experience of regional initiatives in Southeast Asia provides a cautionary note that, while there is the potential for peaceful development of the South China Sea, there are significant challenges to structuring successful programs.
David Jay Green is Professor of Global Economics at Hult International Business School, USA. He has been a tenured professor of economics at Hosei University, Japan, and an economist at both the US Federal Reserve Board in Washington, D.C., and at the Asian Development Bank, the Philippines. He earned his PhD from Columbia University, USA.