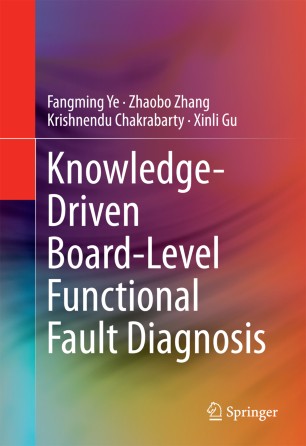 This book provides a comprehensive set of characterization, prediction, optimization, evaluation, and evolution techniques for a diagnosis system for fault isolation in large electronic systems. Readers with a background in electronics design or system engineering can use this book as a reference to derive insightful knowledge from data analysis and use this knowledge as guidance for designing reasoning-based diagnosis systems. Moreover, readers with a background in statistics or data analytics can use this book as a practical case study for adapting data mining and machine learning techniques to electronic system design and diagnosis. This book identifies the key challenges in reasoning-based, board-level diagnosis system design and presents the solutions and corresponding results that have emerged from leading-edge research in this domain. It covers topics ranging from highly accurate fault isolation, adaptive fault isolation, diagnosis-system robustness assessment, to system performance analysis and evaluation, knowledge discovery and knowledge transfer. With its emphasis on the above topics, the book provides an in-depth and broad view of reasoning-based fault diagnosis system design.
• Explains and applies optimized techniques from the machine-learning       domain to solve the fault diagnosis problem in the realm of electronic system design and manufacturing;
• Demonstrates techniques based on industrial data and feedback from an actual manufacturing line;
• Discusses practical problems, including diagnosis accuracy, diagnosis time cost, evaluation of diagnosis system, handling of missing syndromes in diagnosis, and need for fast diagnosis-system development.

Krishnendu Chakrabarty is the William H. Younger Distinguished Professor of Engineering in the Department of Electrical and Computer Engineering and Professor of Computer Science at Duke University. He is a recipient of the National Science Foundation Early Faculty (CAREER) award, the Office of Naval Research Young Investigator award, the Humboldt Research Award from the Alexander von Humboldt Foundation, Germany, the IEEE Transactions on CAD Donald O. Pederson Best Paper award (2015), and 11 best paper awards at major IEEE conferences. He is also a recipient of the IEEE Computer Society Technical Achievement Award (2015) and the Distinguished Alumnus Award from the Indian Institute of Technology, Kharagpur (2014). Prof. Chakrabarty is a Hans Fischer Senior Fellow at the Institute for Advanced Studies, Technical University of Munich, Germany.

Prof. Chakrabarty’s current research projects include: testing and design-for-testability of integrated circuits and system; digital microfluidics, biochips, and cyberphysical systems; optimization of enterprise systems and smart manufacturing. He is a Fellow of ACM, a Fellow of IEEE, and a Golden Core Member of the IEEE Computer Society. Prof. Chakrabarty served as the Editor-in-Chief of IEEE Design & Test of Computers during 2010-2012 and ACM Journal on Emerging Technologies in Computing Systems during 2010-2015. Currently he serves as the Editor-in-Chief of IEEE Transactions on VLSI Systems.

Xinli Gu is a Senior Director at Huawei Technologies, where he leads design solution for network product quality and reliability. He also had 12-year experiences with Cisco Systems, responsible for product testability and manufacturing quality at corporate level.