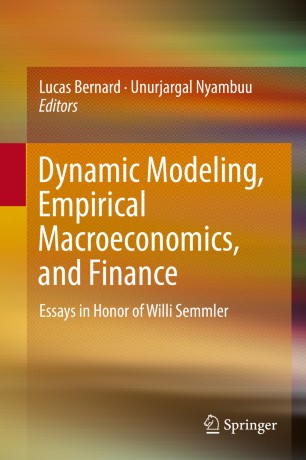 Essays in Honor of Willi Semmler

This edited volume, with contributions by area experts, offers discussions on a range of evolving topics in economics and social development. At center are important issues central to sustainable development, economic growth, technological change, the economics of climate change, commodity markets, long wave theory, non-linear dynamic models, and boom-bust cycles. This is an excellent reference for academic and professional economists interested in emerging areas of empirical macroeconomics and finance. For policy makers and curious readers alike, it is also an outstanding introduction to the economic thinking of those who seek a holistic and all-compassing approach in economic theory and policy.  Looking into new data and methodology, this book offers fresh approaches in a post-crisis environment. Set in a profound understanding of the diverse currents within the many traditions of economic thought, this book pushes the established frontiers of economic thinking. It is dedicated to a leading scholar in the areas covered in this book, Willi Semmler.

Lucas Bernard, Ph.D., is a financial economist and Chairman of the Department of Business at The New York City College of Technology, The City University of New York.  In addition to having studied at The Swiss Finance Institute, he also holds graduate degrees in Mathematics from The City University of New York and in computer science from New York University’s Courant Institute of Mathematical Sciences.  His doctoral dissertation, concerning endogenous models of credit default, was written at The New School for Social Research in New York.  Prof. Bernard is interested in the ways in which economics blends together human values, politics, rationality and irrationality; more specifically, how this interplay reveals itself in society at large.

Unurjargal Nyambuu, Ph.D., is an economist and professor in the Department of Social Science at The New York City College of Technology, The City University of New York.  Previously, she was a research fellow in the Finance and Risk Engineering Department of New York University. Dr. Nyambuu has also served as an economist with the Central Bank of Mongolia, where she worked with International Monetary Fund (IMF) and World Bank (WB) colleagues on the effects of international macroeconomic policy on local economies. Additionally, she is a consultant for the International Labour Organization, a United Nations affiliate based in Genève, Switzerland, where she studies the economic impact of “green” policy.