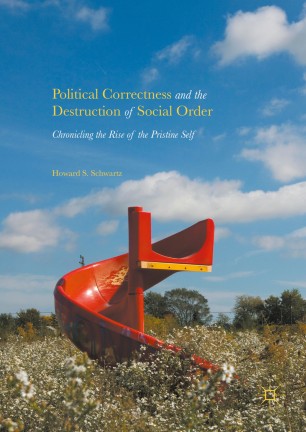 Political Correctness and the Destruction of Social Order

Chronicling the Rise of the Pristine Self

Howard S. Schwartz is Emeritus Professor of Organizational Behavior in the School of Business Administration, Oakland University, USA. He studied philosophy at Antioch College, USA, the University of Pittsburgh, USA, and University of California, San Diego, USA. He obtained a PhD in organizational behavior from Cornell University, USA. His previous books on political correctness are Revolt of the Primitive (2001) and Society Against Itself (2010). He and his wife Ann live in Jackson Heights, New York.

“Howard Schwartz has done it again: He has written a book that lays bare the machinations of power hungry people committed to using political correctness to silence opposition. His theory of anti-Oedipal psychology is unquestionable, his rules of political correctness inarguable, and his ability to get to the heart of the matter unequaled. Howard’s emphasis on the ‘Pristine Self’ should both enlighten and shame the collective American intellect. Bravo.” (AWR Hawkins, PhD, Breitbart News)

“No institution on the planet is capable of providing the type of pristine, unconditional existence sought by many in today's universities.  It is simply unattainable because it is fantasy.  Schwartz is compelling and fearless in his psychological analysis of how reason, and reality itself, are under attack in places that were once bastions of free speech.  The final irony is that Schwartz’s work should be the subject of college courses, but would surely be banned as a thoughtcrime.” (James L. Knoll, IV, M.D., Professor of Psychiatry, SUNY Upstate Medical University, USA)

“Howard Schwartz takes the exploration of political correctness to unusual depths. PC is not for (or against) particular opinions, it is an assertion of the supremacy of self over social and natural reality. Consequently, it is also a prescription for defeat in an unloving world that can never accommodate itself to all of our desires. As this book demonstrates, our universities have been abjectly surrendering to this delusion.” (Steve Balch,  Director of the Texas Tech Institute for the Study of Western Civilization and  founding President of the National Association of Scholars)

“Schwartz attempts to account for 'political correctness,' especially among young people on college campuses. He focuses on the social psychology of this pervasive and destructive phenomenon, through the lens of psychoanalytic theory.  There is simply no question that ‘political correctness’ on college campuses is wreaking havoc in ways that Schwartz addresses.” (Robert Jackall, Willmott Family Professor Sociology and Public Affairs, Williams College, USA)