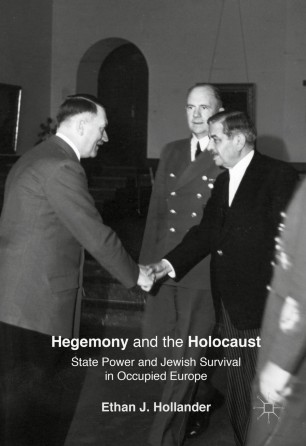 Hegemony and the Holocaust

This book explains why more Jewish people survived in some German-occupied countries compared to others during World War II.  Hollander demonstrates that collaborators sometimes played a surprising role in ensuring Jewish survival. Where high-ranking governing officials stayed in their countries and helped Nazi Germany, they could often “trade” their loyal cooperation in military and economic affairs for inefficient or incomplete implementation of the Final Solution. And while they sometimes did this because they had sincere moral objections to Nazi policy, they also did so because deporting local Jews was politically unpopular, because they regarded it as less important than winning the war, or because deporting Jews meant that the collaborators gave up potentially profitable opportunities to exploit them. This unique book has important implications for our understanding of state-sponsored violence, international hierarchy, and genocide, and it raises harrowing moral questions about the Holocaust and the nature of political evil.

Ethan J. Hollander is Associate Professor of Political Science and the 2015-16 McLain-McTurnan-Arnold Research Scholar at Wabash College, USA. He conducted research for this project at the Zentrum für Antisemitismusforschung in Berlin, Germany. His research and teaching interests include Ethnic Conflict and Genocide, Comparative Politics, and International Relations. He received his PhD from the University of California, San Diego, USA.

“This book brilliantly links differing forms of the Nazi empire to variation in rates of Jewish victimization in the ‘final solution’ across Europe. Hollander poses in stark form the deeply troubling moral question of whether it is better to collaborate with evil to mitigate its effects or to resist but then suffer its full force. In such terrible circumstances, all are tainted. A magnificent work of politics, history, and philosophy relevant to contemporary questions of ethnic cleansing, cooperation with autocratic rulers, and how we can best protect the human rights of all peoples.” (David A. Lake, Jerri-Ann and Gary E. Jacobs Professor of Social Sciences and Distinguished Professor of Political Science, University of California, San Diego, USA)

“In this fine account, Hollander tackles some of the most troubling and persistent questions of Holocaust research, including and especially the enigma of Jewish survival. Original and insightful, Hegemony and the Holocaust addresses complex questions with captivating prose and scholarly rigor. This is an important contribution to the study of the Holocaust, ideal for students, scholars, and anyone fascinated by the enduring questions of collaboration and resistance to Nazism.” (István Deák, Seth Low Professor Emeritus of History, Columbia University, USA)

“A fascinating and insightful contribution to the current scholarly reappraisal of collaboration and rescue in the Holocaust.” (Mark Roseman, Pat M. Glazer Chair in Jewish Studies, Professor of History, Indiana University, USA)<

“Hollander offers a detailed account for the differing deportation and/or death rates for Jews in eight countries within Nazi-occupied Europe. Its comparative methodology offers an important contribution to the literature on genocide and comparative politics.” (Amy Elman, Weber Professor of Social Science, Kalamazoo College, USA)