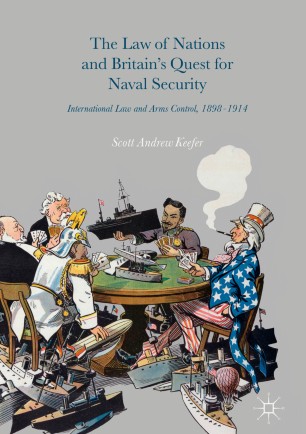 The Law of Nations and Britain’s Quest for Naval Security

As the centenary of the Treaty of Versailles approaches, this book presents the pre-1914 precursors to the interwar naval arms treaties arising from the peace of 1919, providing a fresh perspective on arms control efforts through an interdisciplinary approach. Interweaving historical investigation with legal analysis, Scott Keefer traces the British role in the development of naval arms control, outlining the pragmatic Foreign Office approaches towards international law. By emphasizing what was possible within the existing legal system rather than attempting to create radically powerful international institutions, statesmen crafted treaties to exploit the unique pace of naval construction. Utilizing previously-overlooked archival resources, this book investigates how the great powers exploited treaties as elements of national security strategies. The result is a fuller analysis of the Hague Peace Conferences, Anglo-German discussions, and lesser known regional agreements from the American Great Lakes to South America, and a richer exploration of pre-1914 diplomacy, providing insights into how a past generation perceived questions of war and defence.

Scott Keefer is Lecturer at Bournemouth University, UK. He has previously worked as an international lawyer, as well as teaching at the University of Heidelberg and the London School of Economics.  His research on the history of international law has included a Fulbright Fellowship at the Max Planck Institute.

“Keefer’s book provides a useful and cogent introduction to international law in the context of British arms limitations negotiations and policies in the late nineteenth and early twentieth centuries. He successfully shows how international law operated as a significant part of British diplomacy prior to the First World War. … Keefer’s new book should prove fruitful reading by naval historians seeking to enhance their existing understating of international law and its functioning in the pre-First World War period.” (Alan M. Anderson, International Journal of Maritime History, Vol. 30 (03), August, 2018)
Buy options