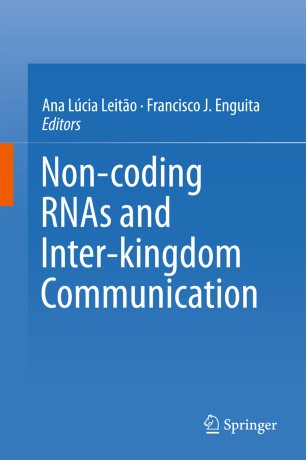 This book presents a state-of-the-art compilation of articles on the role of non-coding RNAs as pivotal molecules for establishing functional relationships between different organisms. It also describes how non-coding RNA molecules can act as dynamic communication devices and how they modulate the interaction between different kingdoms. It describes examples including viruses, bacteria, fungi, and higher organisms such as protozoa that are involved in pathogenic or symbiotic interactions, and the roles of different families of non-coding RNAs within these relationships. Each chapter provides readers molecular and functional insights, breaking down the subjacent mechanisms and exploring their functional implications and future applications. More than sixty years after the foundation of the “RNA tie club” by George Gamow, new roles for non-coding RNA molecules are starting to be revealed.

Ana Lúcia Leitão, Ph.D.
Ana Lúcia Leitão Ph.D., Biological Engineer, graduated in Applied Chemistry by the New University of Lisbon in 1992. She worked for the Portuguese National Institute for Industrial and Technical Engineering (INETI) in 1993 in a pos-graduation of applied molecular biology.  In 1994 she obtained a post-graduation in Microbiology and Biotechnology in the framework of the Young Technician for Industry Programme. In 1995 she started her Ph.D. studies at the Department of Microbiology, Faculty of Biology in León, Spain with a fellowship of Merck Sharp and Dome (New Jersey, USA). She obtained a Ph.D. in biological engineering, from the Life Sciences Department, New University of Lisbon in 1999. Since 1999, she became professor in the Faculty of Sciences and Technology, New University of Lisbon (September 2000-present). She is author of more than 30 scientific publications in international papers and book chapters, and supervisor of 33 Master theses half of them in industry sector. Currently, her research interests are focused on the production of bioactive compounds from fungal strains isolated from non-common environments, and transcriptomic characterization of their metabolic pathways.
Francisco J. Enguita, Ph.D.
Francisco J. Enguita, Ph.D. is Professor of Cell and Molecular Biology at the University of Lisbon Medical School, and Principal Investigator at the Institute of Molecular Medicine from the same University. He got a degree in Pharmaceutical Sciences (1991) from the University of Granada, Spain, and a Ph.D. in Microbiology and Genetics at the School of Pharmacy from the University of Salamanca, Spain (1998). He did a post-doctoral training on Structural Biology and X-ray crystallography at the ITQB supported by an EMBO long-term fellowship (1999-2001), New University of Lisbon. During the period from 2004-2006 he was a group leader in the same institution. He joined the Institute of Molecular Medicine in 2006 as a research member of the Cell Biology Unit and later on as a principal investigator. He is author more than 50 scientific publications, and supervisor of 5 Ph.D. thesis and 6 Master thesis. His current research interests are focused on the role of non-coding RNAs in human diseases, with specific focus on infection.