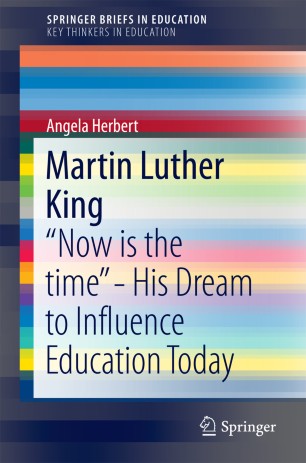 “Now is the time” - His Dream to Influence Education Today

This book explores the significance of Dr Martin Luther King Jr. ‘I have a dream’ speech and the continued legacy to education and academia demonstrated through the study of his life, achievements, works and ultimate assassination, which are included in social studies and history as part of the curriculum. There are lessons to be learned from his speech about access, success and progression to and from education at all levels.  The influence of religion is a key feature that is manifested through social inclusion and tolerance which if considered from an academic perspective results in achievement.  From peaceful demonstration and humble engagement with authorities, King made a mark that would be referenced 50 years later in all areas of academia from teaching young people about his life and achievements to equality, rights and tolerance, reflected throughout this book. The impact of prejudice, discrimination and segregation addressed by King’s campaign which through adversity resulted in the passing of the Civil Rights Bill in the USA supported the non-political rights of all citizens is discussed. All of these concepts influence perception and realistic possibilities in the quest for people from all walks of society to access and benefit from education, which is explored. What motivated King to speak out and selflessly address the rights of the underprivileged, Black and White putting at risk his liberty and ultimately his life? King’s speech is considered and associated with current issues faced by the people that are socially excluded. The struggle for social equality is considered with a focus on the impact of exclusion from education that demonstrates the need for a dream that gives hope to current and future generations that suggests that education can be accessed and lead to academic success.