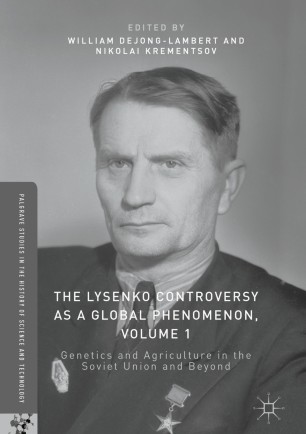 The Lysenko Controversy as a Global Phenomenon, Volume 1

Genetics and Agriculture in the Soviet Union and Beyond

This volume covers the global history of the Lysenko controversy, while exploring in greater depth the background of D. Lysenko’s career and influence in the USSR. By presenting the rise and fall of T.D. Lysenko in a variety of aspects—his influence upon art, unrecognized predecessors, and the extent to which genetics continued in the USSR even while he was in power, and the revival of his reputation today—the authors provide a fresh perspective on one of the most notorious episodes in the history of science.

William deJong-Lambert is an Associate Professor of History at Bronx Community College, CUNY, and Associate Faculty of the Center for Science and Society at Columbia University, USA. His book, The Cold War Politics of Genetic Research: An Introduction to the Lysenko Affair, was published in 2012.

Nikolai Krementsov is a Professor at the Institute for the History and Philosophy of Science and Technology of the University of Toronto, Canada. He is the author of several books and numerous articles on the history of Soviet science, biomedical research, eugenics, and intersections of science and literature.

“The texts published in this two-volume anthology bring new perspectives to discussions about the relationship between science and democracy. … this publication represents what is the most comprehensive and detailed analysis of the phenomenon of Lysenkoism in the twentieth century to date.” (Doubravka Olšáková, Jahrbücher für Geschichte Osteuropas. jgo.e-reviews, Issue 2, 2019)