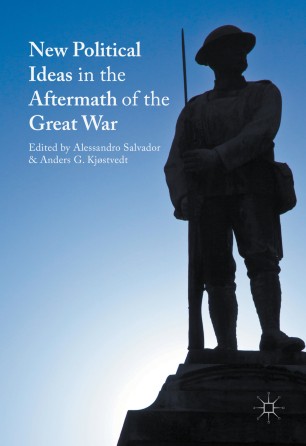 New Political Ideas in the Aftermath of the Great War

This edited collection presents new research on how the Great War and its aftermath shaped political thought in the interwar period across Europe. Assessing the major players of the war as well as more peripheral cases, the contributors challenge previous interpretations of the relationship between veterans and fascism, and provide new perspectives on how veterans tried to promote a new political and social order. Those who had frontline experience of the First World War committed themselves to constructing a new political and social order in war-torn Europe, shaped by their experience of the war and its aftermath. A number of them gave voice to the need for a world order free from political and social conflict, and all over Europe veterans imagined a third way between capitalist liberalism and state-controlled socialism. By doing so, many of them moved towards emerging fascist movements and became, in some case unwillingly, the heralds of totalitarian dictatorships.

Alessandro Salvador is Lecturer in History at the University of Trento, Italy. His main research interests are the First World War, post-war demobilization processes, and the inter-war period in Italy and Germany. He is involved with the ‘World War II: Everyday Life under German Occupation’ project at the Herder Institut, Germany. His recent publications include La Guerra in Tempo di Pace. Gli ex Combattenti e la Politica nella Repubblica di Weimar (2013).
Anders Kjøstvedt is Post-Doctoral Fellow at the University of Oslo, Norway. He is currently working on a project financed by the Norwegian Research Council, ‘Constructing a “People’s Community”: The Dual Processes of Inclusion and Exclusion in National Socialism’. He has published several articles on Nazism and the Nazi movement, and he is especially interested in the relationship between the regime and the population.