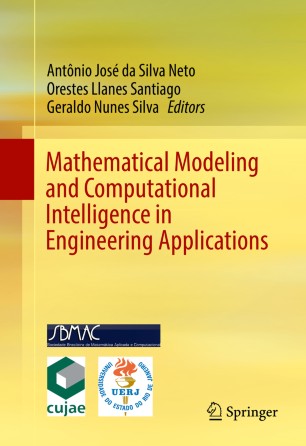 This book brings together a rich selection of studies in mathematical modeling and computational intelligence, with application in several fields of engineering, like automation, biomedical, chemical, civil, electrical, electronic, geophysical and mechanical engineering, on a multidisciplinary approach. Authors from five countries and 16 different research centers contribute with their expertise in both the fundamentals and real problems applications based upon their strong background on modeling and computational intelligence. The reader will find a wide variety of applications, mathematical and computational tools and original results, all presented with rigorous mathematical procedures.

Antônio José da Silva Neto is a Mechanical and Nuclear Engineer (Universidade Federal do Rio de Janeiro - UFRJ, Brazil, 1983), M.Sc. in Nuclear Engineering (UFRJ, 1989), and Ph.D. in Mechanical Engineering, with a minor in Computational Mathematics (North Carolina State University, USA, 1993). He worked as engineer and researcher for the Brazilian National Nuclear Energy Commission - CNEN (1984-1986), and as consultant and engineer for Promon Engineering (1986-1997). In 1997 he joined the faculty of Universidade do Estado do Rio de Janeiro - UERJ, being currently a Full Professor at the Polytechnic Institute. He is the President (2014-2017) of the Brazilian Society of Computational and Applied Mathematics - SBMAC, Member (2014-2016) of the Deliberative Council of the Brazilian Council for Scientific and Technological Development - CNPq, Coordination Member (2008 - ) of the Interdisciplinary Area of the Coordination for the Improvement of Higher Education Personnel - CAPES, and Area Coordinator in Mechanical and Nuclear Engineering (2012 - ) of the Carlos Chagas Filho Foundation for Research Support in the State of Rio de Janeiro (FAPERJ). He is also the Head of the Patrícia Oliva Soares Laboratory for Experimentation and Numerical Simulation in Heat and Mass Transfer (LEMA) and of the Paulo Márcio Mello Laboratory for Metrology and Mechanical Testing (LEMec). He was the President (2009-2013) of the Brazilian Association of Mechanical Sciences and Engineering - ABCM, the Secretary of Science and Technology  (2010-2011) in Nova Friburgo, Rio de Janeiro, and the Coordinator of Projects and Technological Development (1997 - 2008) and the Coordinator of the Graduate Program in Computational Modeling (2005-2007) of the Polytechnic Institute (UERJ). He published nine books (four as editor/organizer), more than 90 journal papers, and more than 300 conference papers. He has supervised 19 doctoral and 39 masters students. His areas of interest are Mechanical Engineering, with emphasis in heat transfer, and Applied and Computational Mathematics, with emphasis in numerical methods and inverse problems.
Orestes Llanes Santiago obtained the Degree of Electrical Engineer from Instituto Superior Politécnico José A. Echeverría, CUJAE in La Habana-Cuba in 1981. He pursued graduate studies from 1989 to 1994 at the Universidad de Los Andes, Mérida-Venezuela, where he obtained the degree of Master of Science in Control Engineering in 1990 and the degree of Doctor in Applied Sciences in 1994. He is currently a Full Professor and Researcher in the Automation and Computing Department of Electrical Engineering Faculty  of  CUJAE, where he has also held the positions of Head of the Automation and Computing Department from 1996 to 2002, Dean of the Electrical Engineering Faculty from 2002 to 2007, Director of Postgraduates Studies in 2008 and Vice Rector of Researches and Postgraduates Studies since 2009. Also, he is currently the Coordinator of the Master Program in Mathematical Modeling applied to Engineering and the Head of the Research Laboratory in Parameter Estimation and Fault Diagnosis in Industrial Systems.  He is also a member of the International Federation of Automatic Control (IFAC) and  the General Coordinator of the National Member Organization of Cuba in IFAC  (Red de Automática de Cuba) since 1998.  Furthermore, he is currently a Titular member of the Sciences Academy of Cuba for the period 2012-2016. He is author or coauthor of more than 150 technical papers.  His areas of interest are the fault diagnosis in industrial systems, nonlinear control and computational intelligence with applications to control.
Geraldo Nunes Silva got his first degree in Mathematics from Universidade Federal de Uberlândia (1984), master in Mathematics from Universidade de Brasília (1986) and PhD in Control Theory from Imperial College London (1993). He is currently (full) Professor at Universidade Estadual Paulista Júlio de Mesquita Filho and Deputy Director of The Institute of World Language, Natural Science and Mathematics (IBILCE) for the period of 2015-2019. He was President of the Brazilian Society for Applied and Computational Mathematics (SBMAC) for two consecutive biannual terms. The last term ended in December 2013. Besides his administrative duties, he runs a vigorous research program in Control Theory and Applied Mathematics in his home institution and supervises a number of PhD and Master Students, as well as  Post-Doctorate fellows. His research interests are nonsmooth optimal control, impulsive control and control problems with non-probabilistic uncertainties. He is an editor of the SBMAC journal "Computation and Applied Mathematics", published with Springer. He is an author or coauthor of more than 40 journal papers.