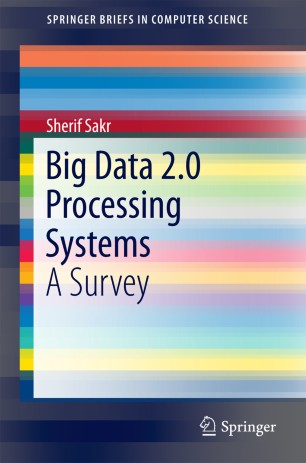 This book provides readers the “big picture” and a comprehensive survey of the domain of big data processing systems. For the past decade, the Hadoop framework has dominated the world of big data processing, yet recently academia and industry have started to recognize its limitations in several application domains and big data processing scenarios such as the large-scale processing of structured data, graph data and streaming data. Thus, it is now gradually being replaced by a collection of engines that are dedicated to specific verticals (e.g. structured data, graph data, and streaming data). The book explores this new wave of systems, which it refers to as Big Data 2.0 processing systems.

Overall, the book offers a valuable reference guide for students, researchers and professionals in the domain of big data processing systems. Further, its comprehensive content will hopefully encourage readers to pursue further research on the subject.

Sherif Sakr is an academic, professional specialist and consultant of Big Data systems. He received his PhD degree in Computer and Information Science from Konstanz University, Germany in 2007. He received his BSc and MSc degrees in Computer Science from the Information Systems department at the Faculty of Computers and Information in Cairo University, Egypt, in 2000 and 2003 respectively. In 2013, Sherif has been awarded the Stanford Innovation and Entrepreneurship Certificate.
He is currently a professor of computer and information science in the Health Informatics department at King Saud bin Abdulaziz University for Health Sciences. He is also affiliated with the University of New South Wales and DATA61/CSIRO (formerly NICTA). In 2008 and 2009, Sherif held an Adjunct Lecturer position at the Department of Computing of Macquarie University. In 2011, he held a Visiting Researcher position at the eXtreme Computing Group, Microsoft Research Laboratories, Redmond, WA, USA. In 2012, he held a Research MTS position in Alcatel-Lucent Bell Labs.
Sherif has published more than 90 refereed research publications in international journals and conferences. So far, he (co)-authored three books and co-edited three other books.

“This book surveys the most popular platforms for processing big data, and informs the reader about which platforms will be good with what kind of data and problems. … It is a good resource for students, academics, researchers, and professionals, as it can help them to gain a good understanding of the characteristics of big data, as well as an overview of the existing big data processing systems.” (Gulustan Dogan, Computing Reviews, January, 2017)
Buy options