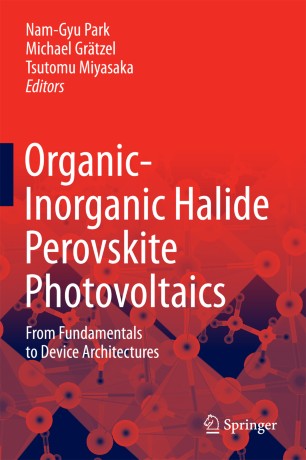 From Fundamentals to Device Architectures

Nam-Gyu Park is a Prof. and SKKU-Fellow at the School of Che. Eng. & Ádjunct prof. at the Dept. of Energy Science, Sungkyunkwan Univ. His research concentrates on high efficiency mesoscopic solar cells including perovskite solar cell and dye-sensitized solar cell since 1997. He is the pioneer in solid state perovskite solar cells, which were first developed in 2012.

Prof. at the Ecole Polytechnique de Lausanne, Michael Grätzel directs the Laboratory of Photonics and Interfaces. He pioneered the use of mesoscopic materials in energy conversion systems, in particular photovoltaic cells, lithium ion batteries and photo-electrochemical devices for the splitting of water into hydrogen and oxygen by sunlight. He discovered a new type of solar cell based on dye sensitized nanocrystalline oxide films.

Tsutomu (Tom) Miyasaka received his Dr. of Engineering from The Univ. of Tokyo in 1981, and joined Fuji Photo Film, Co., conducting R&; Ds on high sensitivity photographic materials, lithium-ion secondary batteries, and design of an artificial photoreceptor, all of which relate to electrochemistry and photochemistry. In 2001, he moved to TUY, Japan, Graduate School of Eng., to continue photoelectrochemistry. In 2006 to 2009 he was the dean of the Graduate School. In 2005 to 2010 he served as a guest professor at The Univ. of Tokyo.