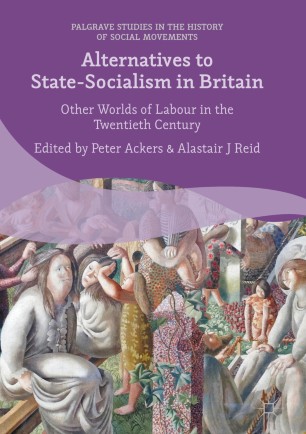 Alternatives to State-Socialism in Britain

Other Worlds of Labour in the Twentieth Century

This book poses a major revisionist challenge to 20th century British labour history, aiming to look beyond the Marxist and Fabian exclusion of working class experience, notably religion and self-help, in order to exaggerate ‘labour movement’ class cohesion. Instead of a ‘forward march’ to secular state-socialism, the research presented here is devoted to a rich diversity of social movements and ideas. In this collection of essays, the editors establish the liberal-pluralist tradition, with the following chapters covering three distinct sections. Part One, ‘Other Forms of Association’ covers subjects such as trade unions, the Co-operative Party, women’s community activism and Protestant Nonconformity. Part Two, ‘Other Leaders’, covers employer Edward Cadbury; Trades Union Congress leader Walter Citrine; and the electricians’ leader, Frank Chapple. Part Three, ‘Other Intellectuals’, considers G.D.H. Cole, Michael Young and left libertarianism by Stuart White. Readers interested in the British Labour movement will find this an invaluable resource.

Peter Ackers is Professor of Employment Relations at De Montfort University, UK, and Visiting Professor of Labour and Social History at Loughborough University, UK. He co-edited Findings a Voice at Work? (2015), and publishes on Hugh Clegg and the ‘Oxford School’ of Industrial Relations, trade unions, working-class Protestantism and labour biography.

Alastair J. Reid is a Life Fellow of Girton College, Cambridge, UK. He was a co-founder of the History & Policy dissemination network. His publications include United We Stand: A History of British Trade Unions (2005) and The Tide of Democracy: Shipyard Workers and Social Relations in Britain, 1870-1950 (2010).

“This collection is redolent with ideas, displays the pluralism of socialism, and is a very important start to both the intellectual and the pragmatic debate which will inevitably develop over the next few years. It is an engaging and stimulating collection of essays and should be read by those concerned about the future of socialist and civic society in Britain, the need for which might very well develop after Brexit.” (Keith Laybourn, Labour History Review, Vol. 82 (2), 2017)
Buy options