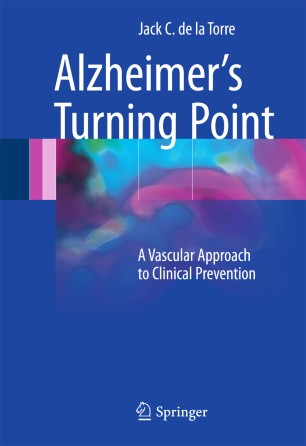 A Vascular Approach to Clinical Prevention

This compelling text provides an overview of the available technology for early detection and therapeutic management of vascular risk factors to Alzheimer’s before severe cognitive impairment symptoms appear.  Chapters bring the reader from the trackless clinical research that has characterized Alzheimer’s progress for the last 20 years, to a nexus of new ideas and concepts that can change our outlook of this dementia.  In-depth examinations of various hypotheses, preventive measures, current and prospective treatments are openly and clearly explored. The author discusses in depth his proposal of the vascular hypothesis of Alzheimer's disease which has become a mother-lode for basic and clinical  studies and a key approach to the prevention of this dementia. Alzheimer’s Turning Point offers professionals, students and those looking to learn more about this disorder a fresh clinical perspective of this devastating disease.

University of Texas at Austin,

Dr. Jack de la Torre is a leading authority in the field of Alzheimer's disease (AD). In 1993, he first advanced the concept of AD as a vascular disorder with neurodegenerative consequences in a series of basic and clinical papers that culminated in the CATCH (critically-attained threshold of cerebral hypoperfusion) vascular hypothesis of AD. The vascular hypothesis of AD has had a profound impact and influence on research studies involving epidemiology, neuroimaging, neuropathology and therapeutics that continue to clarify the pathophysiology and pathogenesis of Alzheimer dementia. Dr. de la Torre has edited or co-edited 10 volumes on the subject of vascular factors in AD and published over 200 peer reviewed papers on neurodegeneration, neuropathology and neurotransmission. He has held professorial appointments in the Departments of Neurosurgery at the University of Chicago, Northwestern University, University of Ottawa, and in Pathology at Case Western Reserve University. Dr. de la Torre continues his active research on Alzheimers disease as an Adjunct Professor in the Department of Psychology at the University of Texas at Austin.