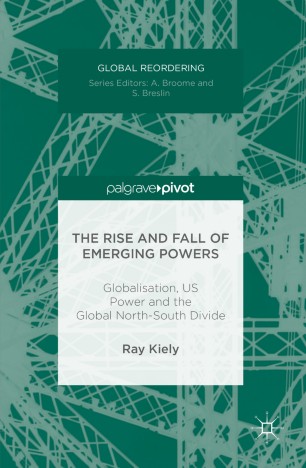 The Rise and Fall of Emerging Powers

Globalisation, US Power and the Global North-South Divide

This book critically examines the argument that the Global South has risen in recent years, that its rise has intensified since the 2008 financial crisis, and that this in turn has hastened the decline of the West and the US in particular. Drawing on critical theories of international relations and development, Kiely puts the rise into context and shows how the factors that aided the rise of the South have now given way to a less favourable international context. Indeed, economic problems in China and other leading countries, falling commodity prices and capital outflows point us in the direction of identifying a new phase of the 2008 financial crisis: an emerging markets crisis. Kiely argues that this is a crisis which demonstrates the continued dependent position of the South in the context of the uneven and combined development of international capitalism.
Ray Kiely is Professor of Politics at Queen Mary University of London, UK. He is the author of eight previous books including Rethinking Imperialism (2010), and The BRICS, US ‘Decline’ and Global Transformations (2015).

Ray Kiely is Professor of Politics at Queen Mary University of London, UK. He is the author of eight previous books including Rethinking Imperialism (2010), and The BRICS, US ‘Decline’ and Global Transformations (2015).

“Reviving older debates from development theory, Kiely critically uses the concepts of dependency and uneven development to put the so-called rise of the South into context, and to show how we are now moving into a far more uncertain era of slowdown and perhaps even crisis. This is a clear and compelling account.” (Andy Sumner, King's College, London, UK)

“Claims about the ‘Rise of the South’ and the ‘decline of the USA’ suggest that the global economy is undergoing an epochal transformation. This book examines these world-historical changes in unprecedented detail. It brings about a picture that is much more complex, nuanced and uncertain than that allowed by conventional discourses, suggesting that the emerging markets boom may be giving way to crisis. This book is a tour de force by one of the most prominent political sociologists today. An indispensible read.” (Alfredo Saad-Filho, SOAS University of London, UK)

“One of the most timely books of our era. The deepening economic problems in many of the leading developing states of the global south, from China to South Africa to Brazil, sustains Ray Kiely’s analysis of structural reasons for why the earlier emerging markets boom is now  turning - in a new ominous phase of the global disorder unleashed on Wall Street in 2008 - into an emerging market crisis. With this important new book, Kiely reinforces his status as one of the most profound and perceptive scholars of international political economy today.” (Leo Panitch, York University, Toronto, Canada)