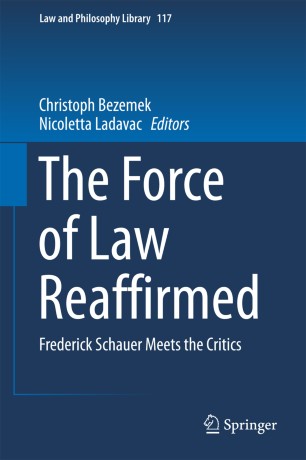 The Force of Law Reaffirmed

This book examines the success of Frederick Schauer’s efforts to reclaim force as a core element of a general concept of law by approaching the issue from different legal traditions and distinct perspectives. In discussing Schauer’s main arguments, it contributes to answering the question whether force, sanctions and coercion should (or should not) be regarded as necessary elements of the concept of law, and whether legal philosophy should be concerned at all (or exclusively) with necessary or essential properties.
While it was long assumed that legal norms are essentially defined by their force, it was H.L.A. Hart who raised doubts about whether law and coercion are necessarily connected, referring to the empowering, or more generally enabling, character exhibited by some legal norms. Prominent scholars following and refining Hart’s argument built an influential case for excluding force as a necessary element of the concept of law. Most recently, however, Frederick Schauer has made a strong case to reaffirm the force of law, shedding new light on this essential question.  This book collects important commentaries, never before published, by prominent legal philosophers evaluating Schauer’s substantive arguments and his claims about jurisprudential methodology.

Force of Law H.L.A. Hart Excluding Force and Coercion Essential Properties of Law Reclaim Force as a Core Element of Law Force, Sanctions and Coercion Necessary Elements of the Concept of Law Normative Systems Coercion and the Normativity of Law Frederick Schauer’s ‘The Force of Law’ Normative Systems as Law in Synergy Validity and Effectiveness Coercion, Sovereignty, and the Differentiation of Law