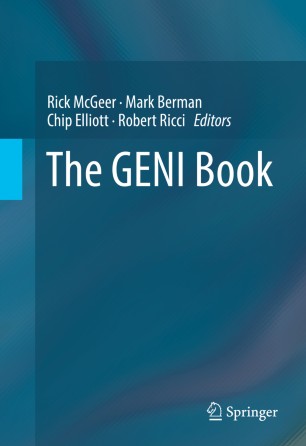 This book, edited by four of the leaders of the National Science Foundation’s Global Environment and Network Innovations (GENI) project, gives the reader a tour of the history, architecture, future, and applications of GENI.  Built over the past decade by hundreds of leading computer scientists and engineers, GENI is a nationwide network used daily by thousands of computer scientists to explore the next Cloud and Internet and the applications and services they enable, which will transform our communities and our lives. Since by design it runs on existing computing and networking equipment and over the standard commodity Internet, it is poised for explosive growth and transformational impact over the next five years.
Over 70 of the builders of GENI have contributed to present its development, architecture, and implementation, both as a standalone US project and as a federated peer with similar projects worldwide, forming the core of a worldwide network. Applications and services enabled by GENI, from smarter cities to intensive collaboration to immersive education, are discussed.  The book also explores the concepts and technologies that transform the Internet from a shared transport network to a collection of “slices” -- private, on-the-fly application-specific nationwide networks with guarantees of privacy and responsiveness.
The reader will learn the motivation for building GENI and the experience of its precursor infrastructures, the architecture and implementation of the GENI infrastructure, its deployment across the United States and worldwide, the new network applications and services enabled by and running on the GENI infrastructure, and its international collaborations and extensions. This book is useful for academics in the networking and distributed systems areas, Chief Information Officers in the academic, private, and government sectors, and network and information architects.

Rick McGeer is a Principal Investigator with the Communications Design Group at SAP Labs, Chief Scientist at US Ignite, and an Adjunct Professor of Computer Science at the University of Victoria.  He earned a PhD in Computer Science from the University of California, Berkeley, in 1989.  He is a Senior Member of the IEEE and a Member of the ACM.  He is the author of over 100 papers in the fields of networking, distributed systems, programming language design, formal verification, timing analysis and logic design.  He is the author of Integrating Functional and Temporal Analysis of Logic Circuits.
Mark Berman is Vice President for Technology Development at Raytheon BBN Technologies and GENI Project Director. Mark works with the GENI community, which spans dozens of universities, government and industry partners, to ensure that GENI is well designed, technically feasible, and satisfies its research requirements. Mark’s research interests are in the area of complex distributed systems and their usability. He has twice (1966, 2006) been named Time’s Person of the Year (shared).
Chip Elliott is Chief Scientist at Raytheon BBN Technologies, an Adjunct Professor of Computer Science at Dartmouth College, and a Fellow of the AAAS, ACM, and IEEE. He served as the first GENI Project Director.
Robert Ricci is a Research Assistant Professor in the School of Computing at the University of Utah, and one of the directors of the Flux Research Group. He earned a PhD from the University of Utah in 2010, and an Honors BS from Utah in 2001. His research interests are in the fields of systems and networking, and much of his energy has gone into creating top-quality experimental environments. He has worked in a diverse set of areas including distributed systems, combinatorial optimization, security, networking, simulation, and embedded systems. He has been a primary architect and implementor of Emulab and follow-on systems such as ProtoGENI and CloudLab since 2000.

“The book is a fantastic compendium of various papers picked to highlight the advances in the GENI project. It is a great book for master’s or PhD-level research professionals.” (Naga Narayanaswamy, Computing Reviews, May, 2017)
Buy options