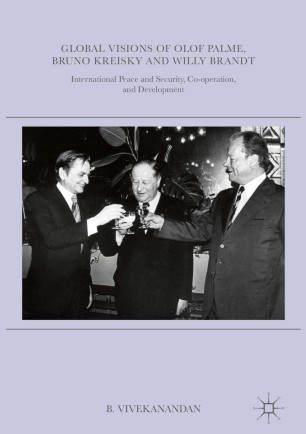 This book analyses the global visions of Olof Palme, Bruno Kreisky and Willy Brandt, European social democratic statesmen who earned international esteem for their contributions to global developments during the second half of the twentieth century. Their visions encompassed, inter alia, international peace and security, East-West and North- South Cooperation, and other important domains pertinent to developing countries of Asia, Africa and Latin America. In this volume, the author closely examines the advancements Palme, Kreisky and Brandt made and demonstrates how their visions remain valid for shaping the future of mankind.

Professor B. Vivekanandan is Former Chairman of the Centre for American and West European Studies, at the School of International Studies, Jawaharlal Nehru University, in New Delhi. He is also the recipient of D.S.S.c. (h.c.), the highest honour of Helsinki University. He was Visiting Professor of Carlton and Helsinki Universities, and was Visiting Fellow of Constanz University, Germany. He is the author, co-author, editor, and co-editor of many international relations books published in India, UK and the USA.