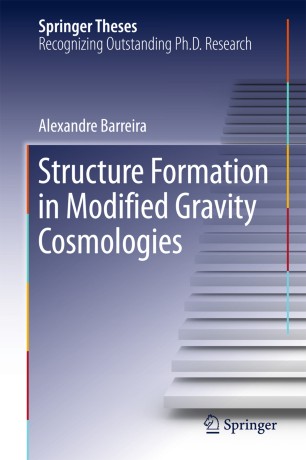 This unique thesis covers all aspects of theories of gravity beyond Einstein’s General Relativity, from setting up the equations that describe the evolution of perturbations, to determining the best-fitting parameters using constraints like the microwave background radiation, and ultimately to the later stages of structure formation using state-of-the-art N-body simulations and comparing them to observations of galaxies, clusters and other large-scale structures. This truly ground-breaking work puts the study of modified gravity models on the same footing as the standard model of cosmology. Since the discovery of the accelerating expansion of the Universe, marked by the awarding of the 2011 Nobel Prize in Physics, there has been a growing interest in understanding what drives that acceleration. One possible explanation lies in theories of gravity beyond Einstein’s General Relativity. This thesis addresses all aspects of the problem, an approach that is crucial to avoiding potentially catastrophic biases in the interpretation of upcoming observational missions.