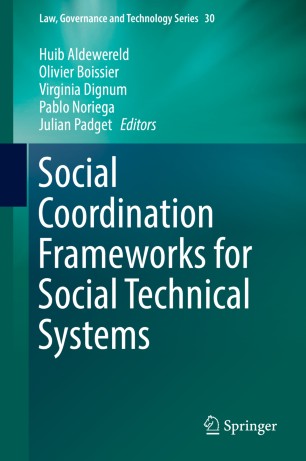 This book addresses the question of how to achieve social coordination in Socio-Cognitive Technical Systems (SCTS). SCTS are a class of Socio-Technical Systems that are complex, open, systems where several humans and digital entities interact in order to achieve some collective endeavour. The book approaches the question from the conceptual background of regulated open multiagent systems, with the question being motivated by their design and construction requirements. The book captures the collective effort of eight groups from leading research centres and universities, each of which has developed a conceptual framework for the design of regulated multiagent systems and most have also developed technological artefacts that support the processes from specification to implementation of that type of systems. The first, introductory part of the book describes the challenge of developing frameworks for SCTS and articulates the premises and the main concepts involved in those frameworks. The second part discusses the eight frameworks and contrasts their main components. The final part maps the new field by discussing the types of activities in which SCTS are likely to be used, the features that such uses will exhibit, and the challenges that will drive the evolution of this field.

Dr. Huib Aldewereld (male, 1980, PhD, Artificial Intelligence), is Assistant Professor at the Faculty Technology, Policy, and Management of Delft University of Technology. His research focuses on operationalisation, contextualisation and implementation of norms and values in (software) systems to enable value-sensitive design and system interoperability. He has participated in several EU and national projects, is a member of the reviewing board of the main journals and conferences on AI in general, and normative systems in particular, and (co-)organized and -chaired several international conferences and workshops. He recently co-initiated the Meta-models for Social Coordination (M4SC) workforce, aiming to integrate ten years of research on Social Coordination in Socio-Cognitive Technical Systems.

Olivier Boissier received his PhD in Computer Science at INP Grenoble in 1993 and his ”Habilitation à Diriger des Recherches” (HdR) at ENS Mines de Saint-Etienne and Université Jean Monnet Saint-Etienne in 2003. He is currently Full Professor of Computer Science at ENS Mines in Saint- Etienne, France. Olivier Boissier is active in the research and development of multi-agent systems. His primary research interests are multi-agent oriented programming, social coordination applied to various application domains in relation with the Internet of Things, the Web.

Dr. Virginia Dignum (female, 1964, PhD, Artificial Intelligence), is an Associate Professor at the Faculty of Technology Policy and Management. Her research focuses on value-sensitive design of intelligent systems and multi-agent organisations, focussing on the formalisation of moral and normative behaviours and social interactions. She is Secretary of the board of directors of IFAAMAS (International Foundation for Autonomous Agents and Multiagent Systems) and member of the Executive Committee of the IEEE Initiative for Ethical Considerations in the Design of Autonomous Systems. She has participated and reviewed several EU and national projects, is member of the reviewing board for the main journals and conferences in AI and has chaired many international conferences and workshops. She is the organising chair of the European Conference on Artificial Intelligence 2016. She has published more than 180 peer-reviewed papers and several books, yielding a h-index of 27.

Pablo Noriega is currently a scientist in the Artificial Intelligence Research Institute of the Spanish Scientific Research Council (IIIA - CSIC). He received his Ph.D in Computer Science from the Autonomous University of Barcelona, in 1997 with a thesis on multiagent systems. He is the author of more than one hundred scientific publications and his research is centred on regulated multi-agent systems and electronic institutions in particular. His current interests include norm-regulated environments, agreement technologies and social intelligence in general. He was a founding member of the IFAMAS (International Foundation of Autonomous Agents and Multi-agent Systems) and EUMAS (European MAS workshop) boards. He is currently a member of the steering committee of the COIN (Coordination, Organizations, Institutions and Norms in Multiagent systems), NorMAS (Normative Multiagent Systems), ECSI (European Conference for Social Intelligence) workshops, and a member of the program committee of a dozen conferences and workshops every year. He has held various academic positions in Mexico where he got his undergraduate degree in Actuarial Science. He held appointments in the Mexican government as CTO of the National Institute of Statistics, Geography and Informatics (1998-99) and chief IT policy maker for the Mexican Government (1989-94). He is a past president of the Mexican AI Society (SMIA) and of the Mexican National Actuarial Association (Colegio Nacional de Acturarios).

Julian Padget is a member of the Intelligent Systems group in the Computer Science department at the University of Bath. He was awarded his PhD in 1984 and continued to work on distributed symbolic
computation, primarily in Lisp, until the mid-1990s. The main focus of his work since then has been on intelligent agents and how to govern (their) autonomy to build resilient and adaptive systems. In this context, research interests include computational logic and inductive logic programming with practical applications in agent architecture, legal reasoning, security analysis, agent-based simulation, argumentation, requirements engineering and computer games (in conjunction with industrial partners). Related and earlier work has addressed distributed systems, programming language design, semantic web services and computer algebra.