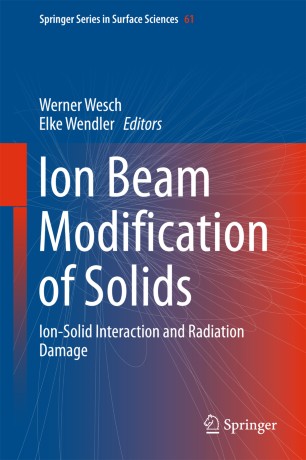 This book presents the method of ion beam modification of solids in realization, theory and applications in a comprehensive way. It provides a review of the physical basics of ion-solid interaction and on ion-beam induced structural modifications of solids. Ion beams are widely used to modify the physical properties of materials. A complete theory of ion stopping in matter and the calculation of the energy loss due to nuclear and electronic interactions are presented including the effect of ion channeling. To explain structural modifications due to high electronic excitations, different concepts are presented with special emphasis on the thermal spike model. Furthermore, general concepts of damage evolution as a function of ion mass, ion fluence, ion flux and temperature are described in detail and their limits and applicability are discussed. The effect of nuclear and electronic energy loss on structural modifications of solids such as damage formation, phase transitions and amorphization is reviewed for insulators and semiconductors. Finally some selected applications of ion beams are given.