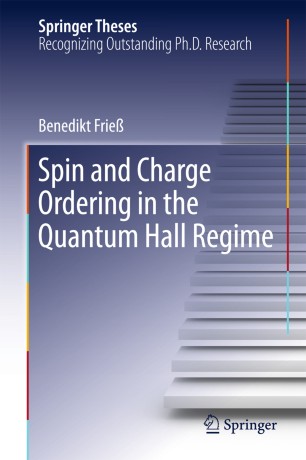 Spin and Charge Ordering in the Quantum Hall Regime

The book presents a comprehensive yet concise introduction to the physics of two-dimensional electron systems in the quantum Hall regime, as well as an up-to-date overview of the current fields of research concerning the integer and fractional quantum Hall effect. The physics of two-dimensional electron systems at low temperatures and high magnetic fields are governed by the formation of discrete energy levels referred to as Landau levels. These narrow energy bands not only form the basis of the well-known quantum Hall effect but also promote strong interactions between the electrons, giving rise to some of the finest manifestations of many-body physics in solid state science. Examples include skyrmionic spin textures, ferromagnetic spin transitions, stripe and bubble phases, as well as fractional quantum Hall states with potential non-abelian exchange statistics.
The thesis succeeds in profoundly deepening our understanding of these exotic states of matter, with a main focus on the density-modulated phases in the quantum Hall regime. These phases arise from the interplay of competing interactions and are characterized by a self-organized ordering of electrons in spatial patterns. Similar phases of matter are currently being studied in other material systems as well, most notably in high-temperature superconductors. The thesis stands out not only in terms of its contribution to improving readers’ grasp of physics, but also in the diversity and novelty of the measurement techniques employed, which take advantage of the interaction between the electrons and the surrounding crystal lattice.

Benedikt Frieß studied physics at the University of Würzburg with scientific stays at the Universities of Oxford and Stanford. He received a Master of Science degree with honors for his work on light-matter interaction in photonic crystal cavities. For his PhD studies, he joined the department of Prof. Dr. Klaus von Klitzing at the Max Planck Institute for Solid State Research in Stuttgart in 2010. There he investigated the behavior of two-dimensional electron systems under the influence of strong magnetic fields in a regime which is dominated by the quantum Hall effect. Since 2014, he works as a postdoctoral scientist at the Max Planck Institute. In 2015, Benedikt Frieß was awarded the Otto Hahn Medal for his successful work on charge ordering and electron-nuclear spin interaction in the quantum Hall regime.