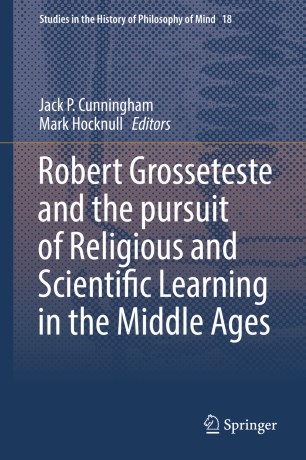 Part of the Studies in the History of Philosophy of Mind book series (SHPM, volume 18)

This book explores a wide range of topics relating to scientific and religious learning in the work of Bishop Robert Grosseteste (c. 1168–1253) and does so from various perspectives, including those of a twenty-first century scientists, historians and philosophers as well as several medievalists. In particular, it aims to contribute to our understanding of where to place Grosseteste in the history of science (against the background of the famous claim by A.C. Crombie that Grosseteste introduced what we now might call “experimental science”) and to demonstrate that the polymathic world of the medieval scholar, who recognized no dichotomy in the pursuit of scientific and philosophical/theological understanding, has much to teach those of us in the modern world who wrestle with the vexed question of the relationship between science and religion. The book comprises an edited selection of the best papers presented at the 3rd International Robert Grosseteste Conference (2014) on the theme of scientific and religious learning, especially in the work of Grosseteste.

Dr. Jack P. Cunningham is Academic Coordinator for Theology at Bishop Grosseteste University Lincoln. Previously he has written on the Reformations in both Ireland and Iceland. Publications include, James Ussher and John Bramhall: the Theology and Politics of two Irish Ecclesiastics of the Seventeenth Century (Ashgate, 2007) and Robert Grosseteste his thought and its Impact (Pontifical Institute of Medieval Studies, 2012).

Dr. Mark D. Hocknull is Chancellor of Lincoln Cathedral and Senior Fellow at the University of Lincoln. He has a PhD in Biochemical Engineering from University College London and a PhD from Lancaster University in Religious Studies. Previous publications include, Pannenberg on Evil, God and Love: the realization of Divine (Ashgate, 2014).-