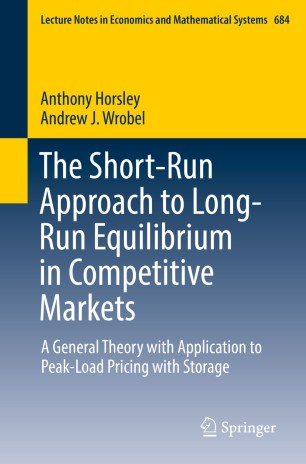 The Short-Run Approach to Long-Run Equilibrium in Competitive Markets

A General Theory with Application to Peak-Load Pricing with Storage

The authors present a new formal framework for finding the long-run competitive market equilibrium through short-run equilibria by exploiting the operating policies and plant valuations. This “short-run approach” develops ideas of Boiteux and Koopmans. Applied to the peak-load pricing of electricity generated by thermal, hydro and pumped-storage plants, it gives a sound and practical method of valuing the fixed assets—in this case, the river flows and the geological sites suitable for reservoirs. Its main mathematical basis is the producer’s short-run profit maximization programme and its dual; their solutions have relatively simple forms that can greatly ease the fixed-point problem of solving for the general equilibrium. Since the optimal values (profit and cost functions) are usually nondifferentiable—this is so when there are joint costs of production such as capacity constraints—nonsmooth calculus is employed to resolve long-standing discrepancies between textbook theory and industrial reality by giving subdifferential extensions of basic results of microeconomics, including the Wong-Viner Envelope Theorem.

Anthony Horsley (1939--2006) was a British mathematical economist and a nuclear physicist who in the 1960s worked for the U.K. Atomic Energy Authority (becoming then its youngest ever Senior Scientific Officer) and for the Council for Scientific Policy. Later, devoting himself to academic research and teaching, he worked on the theory and applications of competitive equilibrium at the University of Sussex, Oxford University and, from 1979 until retirement and untimely death, the London School of Economics. A Renaissance mind, he also had a keen interest in literature, history and politics. He received a Ph. D. in Mathematical Physics from the University of Birmingham and a D. Phil. in Economics from the University of Oxford.

Andrew J. Wrobel (b. 1955) is a Polish-born mathematical economist. He has worked at the Institute of Computer Science in Warsaw and, as a Senior Research Fellow, at the London School of Economics and the Catholic University of Brabant in Tilburg. His main research, joint with Anthony Horsley, is on the theory of competitive equilibrium and its applications to the electricity supply industry. Educated in Warsaw, and in Bonn and London on postgraduate grants from the Studienstiftung des deutschen Volkes and the LSE, he holds an M.A. in Mathematics from the University of Warsaw and a Ph.D. in Economics from the University of London.