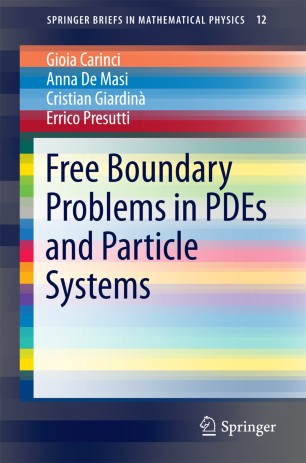 In this volume a theory for models of transport in the presence of a free boundary is developed.
Macroscopic laws of transport are described by PDE's.
When the system is open, there are several mechanisms to couple the system with the external forces. Here a class of systems where the interaction with the exterior takes place in correspondence of a free boundary is considered. Both continuous and discrete models sharing the same structure are analysed.
In Part I a free boundary problem related to the Stefan Problem is worked out in all details. For this model a new notion of relaxed solution is proposed for which global existence and uniqueness is proven. It is also shown that this is the hydrodynamic limit of the empirical mass density of the associated particle system. In Part II several other models are discussed. The expectation is that the results proved for the basic model extend to these other cases.
All the models discussed in this volume have an interest in problems arising in several research fields such as heat conduction, queuing theory, propagation of fire, interface dynamics, population dynamics, evolution of biological systems with selection mechanisms.
In general researchers interested in the relations between PDE’s and stochastic processes can find in this volume an extension of this correspondence to modern mathematical physics.