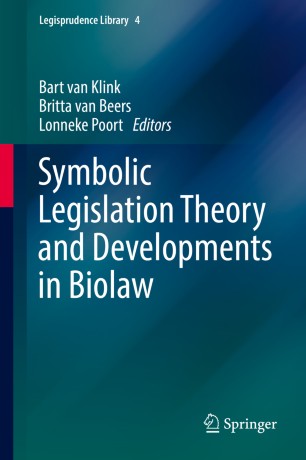 This edited volume covers new ground by bringing together perspectives from symbolic legislation theory on the one hand, and from biolaw and bioethics on the other hand.

Since the 1990s, biomedical developments have revived discussions on symbolic legislation. One of the reasons is that biomedical legislation touches on deep-rooted, symbolic-cultural representations of the biological aspects of human life. Moreover, as it is often impossible to reach consensus on these controversial questions, legislators have sought alternative ways to develop legal frameworks. Consequently, communicative and interactive approaches to legislation are prominent within the governance of medical biotechnology.

The symbolic dimensions of biolaw are often overlooked. Yet, it is clear that the symbolic is at the heart of many legal-political debates on bioethical questions. Since the rise of biomedical technologies, human body materials have acquired a scientific, medical and even commercial value. These new approaches, which radically question existing legal symbolizations of the human body, raise the question whether and how the law should continue to reflect symbolic values and meanings. Moreover, how can we decide what these symbolic values are, given the fact that we live in a pluralistic society?

Bart van Klink is Professor of Legal Methodology at Vrije Universiteit Amsterdam, The Netherlands. He has published several articles and books on symbolic legislation theory, among which his dissertation De wet als symbool (Law as a Symbol, 1998) and, together with Nicolle Zeegers and Willem Witteveen, the edited volume Social and Symbolic Effects of Legislation under the Rule of Law (2005). He is co-founder of the research group Biolaw and Symbolic Interaction (BioSI).

Britta van Beers is Associate Professor at the Department of Legal Theory at VU University, Amsterdam. Her research involves the legal-philosophical aspects of the regulation of medical biotechnology. Recent publications include the edited volume Humanity across International Law and Biolaw (with Luigi Corrias and Wouter Werner, Cambridge University Press 2014); and 'Is Europe ‘Giving in to Baby Markets’? Reproductive Tourism in Europe and the Gradual Erosion of Existing Legal Limits to Reproductive Markets’ (Medical Law Review, 2015).

Lonneke Poort is assistant professor at Erasmus School of Law in Rotterdam, The Netherlands. She is also member of the subcommittee on social and ethical aspects of genetic modification of the Netherlands Commission on Genetic Modification (COGEM). She published several articles and a book on the interactive approach to law among which her dissertation Consensus & Controversies in Animal Biotechnology. An Interactive Legislative Approach to Animal Biotechnology in Denmark, Switzerland, and the Netherlands (Den Haag: Eleven International Publishing 2013).