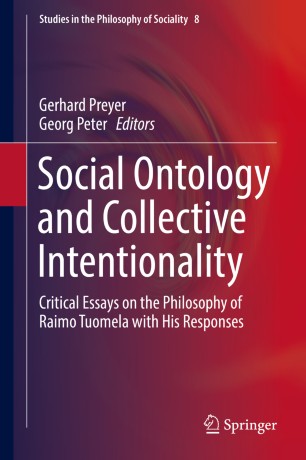 Critical Essays on the Philosophy of Raimo Tuomela with His Responses

Part of the Studies in the Philosophy of Sociality book series (SIPS, volume 8)

This volume features a critical evaluation of the recent work of the philosopher, Prof. Raimo Tuomela and it also offers it offers new approaches to the collectivism-versus-individualism debate. It specifically looks at Tuomela's book Social Ontology and its accounts of collective intentionality and related topics.
The book contains eight essays written by expert contributors that present different perspectives on Tuomela’s investigation into the philosophy of sociality, social ontology, theory of action, and (philosophical) decision and game theory. In addition, Tuomela himself gives a comprehensive response to each essay and defends his theory in terms of the new arguments presented here.

Overall, readers will gain a deeper insight into group reasoning and the "we-mode" approach, which is used to account for collective intention and action, cooperation, group attitudes, social practices, and institutions as well as group solidarity.
This book will be of interest to a wide range of readers and graduate students and researchers interested in contemporary philosophy of sociality, sociological theory, social ontology as well as the philosophy of mind, decision and game theory, and cognitive science.

Gerhard Preyer: Professor of Sociology, Research fields: sociological theory and comparative sociology, philosophy of language and mind. Editor-In-Chief of ProtoSociology: A Journal of Interdisciplinary Research. He is author and editor of, among other works, Intention of Practical Thoughts (2011), Donald Davidson’s Philosophy. From Radical Interpretation to Radical Contextualism (2nd edition, 2011), and Donald Davidson on Truth, Meaning, and the Mental (Oxford, 2012).