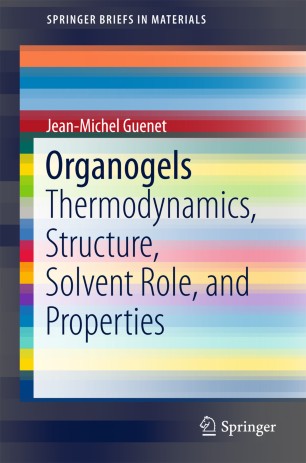 This book provides a physics-oriented introduction to organogels with a comparison to polymer thermoreversible gels whenever relevant. The past decade has seen the development of a wide variety of newly-synthesized molecules that can spontaneously self-assemble or crystallize from their organic or aqueous solutions to produce fibrillar networks, namely organogels, with potential applications in organic electronics, light harvesting, bio-imaging, non-linear optics, and the like. This compact volume presents a detailed outlook of these novel molecular systems with special emphasis upon their thermodynamics, morphology, molecular structure, and rheology. The definition of these complex systems is also tackled, as well as the role of the solvent.  The text features numerous temperature-phase diagrams for a variety of organogels as well as illustrations of their structures at the microscopic, mesoscopic and macroscopic level. A review of some potential applications is provided including hybrid functional materials with polymers and with carbon nanotubes. Throughout, discussions of theoretical developments and experimental advances are written at a level suitable for beginning graduate students through practicing researchers.

Professor Jean-Michel Guenet is Directeur de Recherche at CNRS and former head of the Institut Charles Sadron, Strasbourg, France, a CNRS-owned laboratory associated with the Université of Strasbourg. He has a degree in materials science engineering from Paris XIII University (1974), and obtained a PhD degree in 1980 at Université de Strasbourg (formerly Université Louis Pasteur). He spent a year at Bristol University, UK, under the guidance of Professor A. Keller as a post-doctoral fellow. He was a visiting scientist at NIST with Professor G.B. McKenna, Gaithersburg, USA, in 1985; a visiting professor at Université de Mons-Hainaut, Belgium, with Professor M. Dosière from 1995 to 2004; and an invited professor at Shizuoka University, Japan, with Professor H. Itagaki in 2002 and 2009. He has authored about 170 papers, and has also written two books on Thermoreversible Gelation of Polymers and Biopolymers (Academic Press, 1992), and on Polymer-solvent Molecular Compounds (Elsevier, 2008). In 1990, he was awarded the Dillon Medal of the American Physical Society for his work on polymer gels. He has also founded in 1996 of a series of conferences formerly entitled Polymer-solvent Complexes and Intercalates which has been renamed POLYSOLVAT in 2008. Since 2008 this series of conferences is sponsored by IUPAC as being one of its kind.