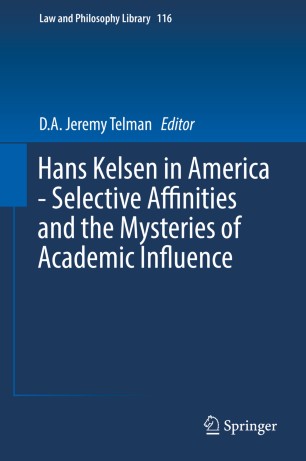 This volume explores the reasons for Hans Kelsen’s lack of influence in the United States and proposes ways in which Kelsen’s approach to law, philosophy, and political, democratic, and international relations theory could be relevant to current debates within the U.S. academy in those areas. Along the way, the volume examines Kelsen’s relationship and often hidden influences on other members of the mid-century Central European émigré community whose work helped shape twentieth-century social science in the United States.
The book includes major contributions to the history of ideas and to the sociology of the professions in the U.S. academy in the twentieth century. Each section of the volume explores a different aspect of the puzzle of the neglect of Kelsen’s work in various disciplinary and national settings.
Part I provides reconstructions of Kelsen’s legal theory and defends that theory against negative assessments in Anglo-American jurisprudence.
Part II focuses both on Kelsen’s theoretical views on international law and his practical involvement in the post-war development of international criminal law.
Part III addresses Kelsen’s theories of democracy and justice while placing him in dialogue with other major twentieth-century thinkers, including two fellow émigré scholars, Leo Strauss and Albert Ehrenzweig.
Part IV explores Kelsen’s intellectual legacies through European and American perspectives on the interaction of Kelsen’s theoretical approach to law and national legal traditions in the United States and Germanny.
Each contribution features a particular applications of Kelsen’s approach to doctrinal and interpretive issues currently of interest in the legal academy.  The volume concludes with two chapters on the nature of Kelsen’s legal theory as an instance of modernism.

D. A. Jeremy Telman is a Professor at the Valparaiso University Law School, where he teaches contracts and various courses in public international law. He earned a J.D. from the New York University School of Law and a Ph.D. modern European history from Cornell University. His main scholarly and teaching interests lie at the intersection of public international law and U.S. constitutional law, and his scholarship has appeared in Austrian, French, German, Indian, Israeli, South African U.K. and U.S. publications.