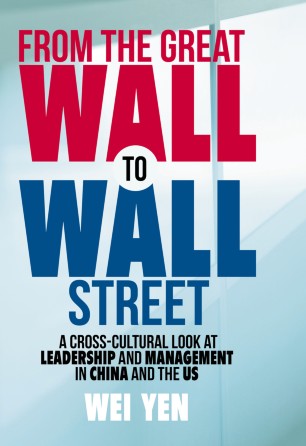 From the Great Wall to Wall Street

Wei Yen explores how differences in world views between Eastern and Western thought and culture have on management and leadership behaviors.

In The Geography of Thought Richard Nisbett showed how the thought and culture of the East is rooted in Chinese Confucian ideals while that of the West goes back to the early Greeks. In From Great Wall to Wall Street, Wei Yen explores how these differences impact today’s leadership and management practices. He delves deeply into the two cultures and their philosophical roots, and explains why there can exist significant misunderstandings between the two camps.

Yen was born in China, raised in Hong Kong, educated both there and in the US and then spent half his working life in the US and half in Asia. From his vantage point, straddling both cultures he compares and contrasts the pragmatic, wholistic Chinese (or Asian) management style with the rational and analytical Western management style. He shows their pros and cons, the areas where they differ and situations where one may be more successful than the other.

Yen argues that understanding traditional Chinese culture, and how it affects management behaviors and current events, can help decision makers make better decisions in business, finance and politics. He further combines culture with credit analysis to argue that it is unlikely that China will suffer a financial collapse despite a slowing economy and high debt levels. Equally, he shows how that same philosophical traditions also lie behind China’s inability to innovate or project the “soft power” that the West’s globally successful popular culture has achieved.

How can the West take advantage of China’s epic rise to strike win-win outcomes? How can the Chinese be more integrated into the global community and become a better global citizen in the future? How can policy makers make more realistic policies? None of these can be accomplished without first understanding where each other is coming from.

Born in China, raised in Hong Kong and educated in the US, Wei Yen has spent half his life and his career living and working in both the US and Asia.

Wei has 23 years of financial industry experience, including as Managing Director for Moody’s Asia Pacific, where he ran its Asian Financial Institutions rating practices, and as Managing Director for Lehman Brothers Asia and Nomura International, where he advised Asian clients on rating and corporate finance. He was also a member of Lehman’s Asia Commitment Committee. Wei also held corporate positions as CFO for iSwitch Corp., a Mainland Chinese technology company, and as Group Treasurer for CITIC Pacific Limited, a Hong Kong listed subsidiary of the conglomerate CITIC Group.

Before relocating to Asia in 1997 with Lehman Brothers, Wei was a biotech VC in New York for Rothschild Ventures, and corporate High-Yield analyst for Moody’s covering the technology and chemicals sectors. Earlier in his career, he was a research physicist and business manager for the American Cyanamid Company.