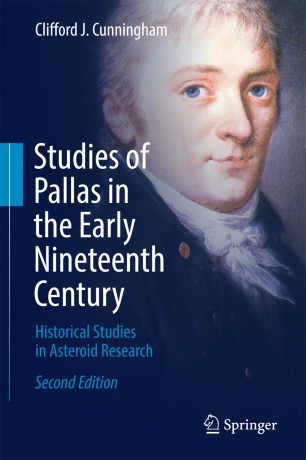 Studies of Pallas in the Early Nineteenth Century

Based on extensive primary sources, many never previously translated into English, this is the definitive account of the discovery of Pallas as it went from being classified as a new planet to reclassification as the second of a previously unknown group of celestial objects. Cunningham, a dedicated scholar of asteroids, includes a large set of newly translated correspondence as well as the many scientific papers about Pallas in addition to sections of Schroeter's 1805 book on the subject.

It was Olbers who discovered Pallas, in 1802, the second of many asteroids that would be officially identified as such. From the Gold Medal offered by the Paris Academy to solve the mystery of Pallas' gravitational perturbations to Gauss' Pallas Anagram, the asteroid remained a lingering mystery to leading thinkers of the time. Representing an intersection of science, mathematics, and philosophy, the puzzle of Pallas occupied the thoughts of an amazing panorama of intellectual giants in Europe in the early 1800s.

Clifford J. Cunningham did his Ph.D. work in the history of astronomy at James Cook University and the University of Southern Queensland in Australia, and he is affiliated with the National Astronomical Research Institute of Thailand. He has written or edited 13 books on the history of astronomy, and his papers have been published in many major journals, including Annals of Science, Journal for the History of Astronomy, Culture & Cosmos, Journal of Astronomical History and Heritage, Studia Etymologica Cracoviensia, The Asian Journal of Physics and The Milton Quarterly. Asteroid (4276) was named Clifford in his honor by the Harvard-Smithsonian Center for Astrophysics.