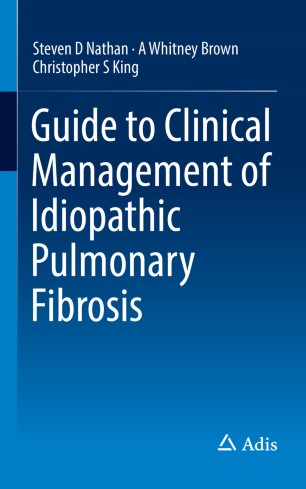 This clinically focused pocket guide offers a concise yet complete overview of idiopathic pulmonary fibrosis, covering the most recent information on aspects such as pathophysiology, management, treatment, and clinical trials. The text is easily accessible and offers pulmonologists and other health care professionals with an excellent quick reference tool. Full color images and figures enhance and summarize key aspects of the text.
Idiopathic pulmonary fibrosis is a condition that affects the alveoli and leads to serious lung damage, and the idiopathic nature of this disease means that the origin or cause is unknown. This disease is relatively rare, affecting 3 in 10,000 people, but it is becoming more common. Physicians should be aware of the early stages and symptoms of this disease so management strategies can be implemented quickly, and the best treatment can be administered.

Steven D Nathan, MD, is the Director of the Advanced Lung Disease Program and the Medical Director of the Lung Transplant Program at Inova Fairfax Hospital in Falls Church, Virginia. Dr Nathan received his medical degree at the University of the Witwatersrand Medical School in Johannesburg, South Africa. He completed his internship in Internal Medicine and General Surgery at the Johannesburg Hospital. Dr Nathan performed his Internal Medicine residency at Long Island Jewish Hospital in New York City, and completed his fellowships in Pulmonary Medicine, Critical Care, and Lung Transplantation at Cedars-Sinai Medical Center in Los Angeles, California.

Dr Nathan has authored over 400 publications including original research manuscripts, abstracts, reviews, electronic publications, book chapters, and a book on idiopathic pulmonary fibrosis (IPF) that he co-edited. Dr Nathan is a reviewer for multiple journals, is an Associate Editor for Pulmonary Year in Review and is on the editorial board of Thorax. He has served on multiple committees, including FDA Advisory Boards as well as steering committees for clinical trials in IPF and pulmonary hypertension, where he has also served as chair. He is also chairperson of Pilot for IPF, an International educational initiative for pulmonary fibrosis.

Christopher S King, MD, is a pulmonologist in the Inova Advanced Lung Disease and Transplant Program and a medical intensivist at the Medical Critical Care Service at Inova Fairfax Hospital in Falls Church, Virginia. Dr King received his BS degree in Biology from Loyola College in Baltimore, Maryland, where he focused on cell and molecular biology. He completed his medical training  at the University of Maryland, Baltimore and completed his residency and fellowship training with the United States Army at Walter Reed Army Medical Center in Washington, DC. After completing his service in the military, Dr King joined the staff of Inova Fairfax Hospital where he works in the Advanced Lung Disease and Lung Transplantation Clinic.