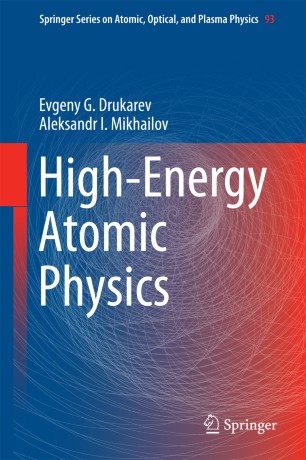 This self-contained text introduces readers to the field of high-energy atomic physics - a new regime of photon-atom interactions in which the photon energies significantly exceed the atomic or molecular binding energies, and which opened up with the recent advent of new synchrotron sources.

From a theoretical point of view, a small-parameter characteristic of the bound system emerged, making it possible to perform analytic perturbative calculations that can in turn serve as benchmarks for more powerful numerical computations. The first part of the book introduces readers to the foundations of this new regime and its theoretical treatment. In particular, the validity of the small-parameter perturbation expansion and of the lowest-order approximation is critically reviewed. The following chapters then apply these insights to various atomic processes, such as photoionization as a many-body problem, dominant mechanisms for the production of ions at higher energies, Compton scattering and ionization accompanied by creation of e-e+ pairs, and the photoionization of endohedral atoms (e.g. fullerene). Last but not least, the computationally challenging transitions in the electron shell during certain types of nuclear decays are investigated in detail.