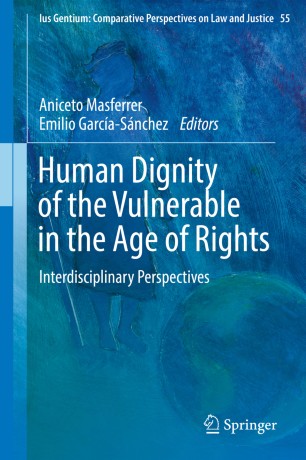 Human Dignity of the Vulnerable in the Age of Rights

This volume is devoted to exploring a subject which, on the surface, might appear to be just a trending topic. In fact, it is much more than a trend. It relates to an ancient, permanent issue which directly connects with people’s life and basic needs: the recognition and protection of individuals’ dignity, in particular the inherent worthiness of the most vulnerable human beings. The content of this book is described well enough by its title: ‘Human Dignity of the Vulnerable in the Age of Rights’. Certainly, we do not claim that only the human dignity of vulnerable people should be recognized and protected. We rather argue that, since vulnerability is part of the human condition, human vulnerability is not at odds with human dignity. To put it simply, human dignity is compatible with vulnerability.

A concept of human dignity which discards or denies the dignity of the vulnerable and weak is at odds with the real human condition. Even those individuals who might seem more skilled and talented are fragile, vulnerable and limited. We need to realize that human condition is not limitless. It is crucial to re-discover a sense of moderation regarding ourselves, a sense of reality concerning our own nature. Some lines of thought take the opposite view. It is sometimes argued that humankind is – or is called to be – powerful, and that the time will come when there will be no vulnerability, no fragility, no limits at all. Human beings will become like God (or what believers might think God to be). This perspective rejects human vulnerability as in intrinsic evil. Those who are frail or weak, who are not autonomous or not able to care for themselves, do not possess dignity. In this volume it is claimed that vulnerability is an inherent part of human condition, and because human dignity belongs to all individuals, laws are called to recognize and protect the rights of all of them, particularly of those who might appear to be more vulnerable and fragile.