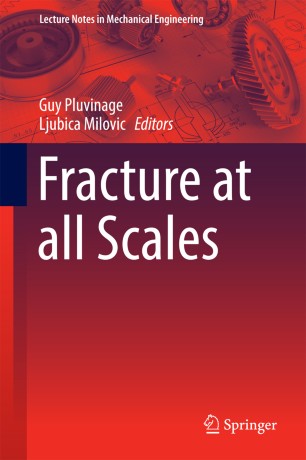 Fracture at all Scales

This book is a compilation of selected papers from the 2014 New Trends in Fatigue and Fracture (NT2F14) Conference, which was held in Belgrade, Serbia. This prestigious conference brought together delegates from around the globe to discuss how to characterize, predict and analyze the fatigue and fracture of engineering materials, components, and structures using theoretical, experimental, numerical and practical approaches.

It highlights some important new trends in fracture mechanics presented at the conference, such as:

•   two-parameter fracture mechanics, arising from the coupling of fracture toughness and stress constraints

•   safety and reliability of welded joints

This book includes 12 contributions from well-known international scientists and a special tribute dedicated to the scientific contributions of Stojan Sedmark, who passed away in 2014.

Professor Guy Pluvinage was a pioneer in fracture mechanics in France. After a thesis on the critical crack opening displacement concept in 1973, he became the same year professor at the University of Metz where he extended the scope of its research to material fatigue. He is a recognized as specialist of notch effects in fracture and fatigue out, on which he has written two books and numerous reference publications. Around this theme, he created a European research network which meets annually since 2000 as part of the New Trends in Fatigue and Fracture Congress. He held many administrative roles at the University of Metz in particular Vice-President of the Scientific Council (1988-1992), Director of the Maison du Pôle Universitaire de Nancy-Metz (1995-2002) and Director of Mechanical Reliability Laboratory ( 1974-2002). He is now Professor Emeritus and heads the consulting firm Mechanical Reliability Consulting. He is the author of over 500 publications and 11 books and has supervised 94 theses. Officer of Academic Palms, he is also Professor Honoris Causa of the University of Miskolc (Hungary) and Doctor Honoris Causa from the Polytechnic University of Tirana (Albania).

Associate professor Ljubica Milović teaches courses in engineering design and materials to undergraduates and postgraduates at the University of Belgrade – Faculty of Technology and Metallurgy. She has taught and performed research at various institutes and schools in Belgrade including Faculty of Mechanical Engineering, Institute for Machinery (transport, construction and mining) and Laboratory for Motor Vehicles. She is member of the European Structural Integrity Society, Serbian Society of Mechanics and Serbian Welding Society. She leads a project financed by Ministry of Education, Science and Technological development. She is assembly president of the Society for Structural Integrity and Life and director of the scientific Journal Structural Integrity and Life. She has organized many international conferences on fracture mechanics and fatigue. She published around 150 scientific and conference papers and is coauthor of 5 text books.